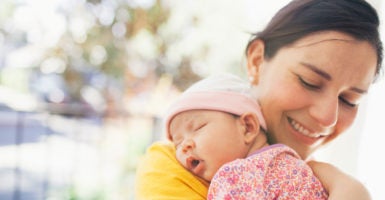 According to the 2019 Gallup poll on values and beliefs, 51% of women consider themselves to be pro-life, compared with 46% of men who self-identify as pro-life. (Photo: Getty Images)

Paige Pristas is a member of the Young Leaders Program at The Heritage Foundation.

It might surprise you, but it’s true: Today, more women than men consider themselves to be pro-life.

According to the 2019 Gallup poll on values and beliefs, 51% of women consider themselves to be pro-life, compared with 46% of men who self-identify as pro-life.

Why do fewer men identify as pro-life? Possible explanations abound.

Is it because abortion provides an “easy out” from a responsibility that is, biologically speaking, one-half a man’s making? Perhaps it’s because women are generally more religious than men and, therefore, more likely to be pro-life for religious reasons. Could it be that men have fallen for the specious notion that they aren’t allowed to have an opinion on abortion at all because they don’t bear and give birth to the child? Perhaps it’s all of the above.

In any case, men often hear “No uterus, no opinion!” as a retort to silence those who might wish to speak out and defend innocent human life.

Meanwhile, a man who supports abortion rights will be greeted with applause—starting with the seven men on the U.S. Supreme Court who handed down the January 1973 Roe v. Wade decision legalizing abortion on demand across the country.

Clearly, some men’s opinions are welcome. But the double standard is obvious, and men shouldn’t accept the notion that they aren’t allowed to have an opinion about a matter as vitally important as basic human rights for all human beings, born and unborn.

The pro-abortion movement relishes framing the abortion debate as a battle of the sexes. But it’s not, because men and women of all ages across the country identify as pro-life.

The slight edge in the percentage of women versus men identifying as pro-life is reflected in the leadership of the right-to-life movement.

Many of the major national pro-life groups are led by women. Among them are Marjorie Dannenfelser at the Susan B. Anthony List; Catherine Glenn Foster at Americans United for Life; Lila Rose at Live Action; Jeanne Mancini at March for Life; Kristan Hawkins at Students for Life; and Carol Tobias at the National Right to Life Committee, to name a few.

Nonetheless, both men and women have a role to play in the fight to defend innocent life from conception to natural death.

Being pro-life is a deeply pro-woman position. And a person’s biological sex has nothing to do with his or her right to form an opinion about abortion or to act on those beliefs.