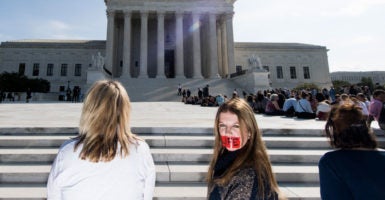 Pro-life abortion protesters, with red tape over their mouths, stand in silent protest on the first day of the new session of the U.S. Supreme Court Oct. 7, 2019. (Photo: Bill Clark/CQ-Roll Call, Inc via Getty Images)

Gov. Matt Bevin walked out of his office for the last time Dec. 9, and it’s somewhat fitting that the U.S. Supreme Court picked that same day to uphold one of the most important laws he ever signed—the Kentucky ultrasound bill.

The justices, who watched the ACLU appeal all the way to their doorstep, refused to even hear the case. Instead, they deferred to the 6th U.S. Circuit Court of Appeals, which didn’t see the harm in showing moms a picture of their babies before they abort. If it’s just “a clump of cells,” who cares? Liberals, that’s who.

The last thing the abortion industry wants is for moms to come face to face with the personhood of their child. It’s why they’ve poured millions of dollars into fighting heartbeat bills, sonograms, even basic medical disclaimers.

When it comes to abortion, technology is—and always has been—the single biggest enemy of the left. Nothing comes between women and their business more than the truth about these tiny humans in the womb—humans that yawn, smile, suck their thumbs.

The imaging is so advanced these days that doctors can track something as small as a baby’s hiccup. It’s a game-changer. Which is exactly why groups like the ACLU and Planned Parenthood are trying to shut down laws like Kentucky’s. It’s hard enough to get moms to destroy their babies. But it’s near impossible once they see and hear how intensely human their children are.

For young moms like Lisa, who never wanted to be pregnant in the first place, it was a revelation.

“I didn’t want to go through with having the baby,” she explained. “I didn’t want to face all of the challenges that a single mom would.” And besides, she said, “My life was just beginning,” and this “makes you feel like your life is over.”

She made three appointments to abort her little girl. But every time, she found a reason not to go. Something just wasn’t right. She went back to the pregnancy care center and they offered her a free sonogram. “I heard the heartbeat,” Lisa remembers, “and it made it all real. There was a real life inside of me.” It made her realize that “no matter what I was feeling or thinking at the time, I had a little one to worry about.”

As hard as it was to tell her parents, Lisa was overcome when they found her note and called her crying. “Through tears they told me they would help—no matter what.”

It hasn’t always been easy, but her daughter, Selah, has been the joy of her life. A few years later, while her daughter played at the park, Lisa struck up a conversation with a woman sitting by her on the bench. Laura was her name. She said she worked at Life Network. Stunned, Lisa pointed to the blonde little girl on the swings. “The pregnancy center saved her life!” she exclaimed.

In its challenge, the ACLU even argued that giving women these options was somehow a violation of doctors’ free speech. But the Supreme Court didn’t buy it. Just like it hasn’t bought other lies about “informed consent” laws. Under Kentucky’s, all doctors are required to do is describe the ultrasound while moms listen to the heartbeat. If the women choose, they can shut their eyes and cover their ears. Even still, the ACLU calls it “unconstitutional and unethical.”

No, what’s unethical is misleading women about the personhood of their baby and the life-long consequences of aborting her. Even now, Laura says, she’s met other young moms who “couldn’t see past their circumstances—a child they’re not ready for, a relationship they’d rather escape.” But then they see their baby’s “heartbeat, fingers, and toes.” She says they see the impact of their ultrasound machine every day.

Thanks to the Supreme Court, let’s hope Kentucky can say the same thing about its informed consent law.