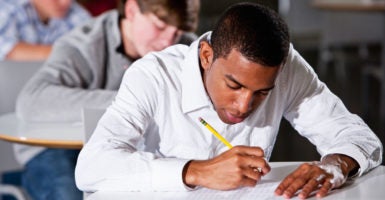 Math and reading scores across the country have continued a yearslong stagnation, with students largely showing no progress in academic achievement. (Photo: Getty Images)

All of that has been just since 2000. Over those past two decades, while federal policymakers were busy enacting new federal laws, creating mandates for local school leaders, and increasing the Department of Education’s budget from $38 billion in 2000 (unadjusted for inflation) to roughly $70 billion today, the math and reading performance of American high school students remained completely flat. That is to say, stagnant.

The U.S. is now above the Organization for Economic Cooperation and Development average in reading, but alas, not because U.S. reading performance has improved. Rather, other countries have seen declines in reading achievement, despite increases in education spending.

In mathematics, however, U.S. performance has steadily declined over the past two decades.

Those are the findings from the Programme for International Student Assessment, or PISA exams, released last week.

About a fifth of American 15-year-olds scored so low on the PISA test that it appeared they had not mastered reading skills expected of a 10-year-old, according to Andreas Schleicher, director of education and skills at the Organization for Economic Cooperation and Development, which administers the exam.

What’s more, the achievement gap between high- and low-performing American students has widened.

The international findings mirror last month’s National Assessment of Educational Progress report, which revealed that math and reading scores across the country have continued a yearslong stagnation, with students largely showing no progress in academic achievement.

Just one-third of students in the fourth and eighth grades reached proficiency in math and reading nationally on the National Assessment of Educational Progress, which is administered every two years.

As with the Programme for International Student Assessment’s findings that the achievement gap stubbornly persists for American students, the National Assessment of Educational Progress highlighted similar findings within the U.S.

The scores of students who are among the lowest 10% of performers on the National Assessment of Educational Progress have dropped significantly since 2009.

The stubborn achievement gap is not new, but the National Assessment of Educational Progress and the Programme for International Student Assessment provide additional data points on its persistence.

The achievement gap in the United States is as wide today as it was in 1971.

The performances on math, reading, and science tests between the most advantaged and the most disadvantaged students differ by approximately four years’ worth of learning, a disparity that has remained essentially unchanged for nearly half a century.

One of the more recent, major pieces of federal intervention sold as a way to improve American standing in education was the Common Core State Standards Initiative promoted during the Obama administration.

Germany now lags the U.S. in reading, according to the new Programme for International Student Assessment data, and is far below Canada, a country that does not have national standards.

Indeed, our neighbor to the north has performed consistently well on the Programme for International Student Assessment since 2000, significantly outpacing the United States, and has neither national standards, nor a federal education department.

Canada’s is a decentralized education system, in which Canada’s 10 provinces set education policy.

The fact that Common Core didn’t catalyze improvements in the U.S. isn’t surprising. Large-scale government programs rarely, if ever, do.

Federal government efforts to improve education have been dismal. Even if there were a constitutional basis for its involvement—which there isn’t—the federal government is simply ill-positioned to determine what education policies will best serve the diverse local communities across our vast nation.

The sooner we can acknowledge that improvements will not come from Washington, the sooner we’re likely to see students flourishing in learning environments that reflect their unique needs and desires.