Speeding Toward Impeachment in the Absence of Facts 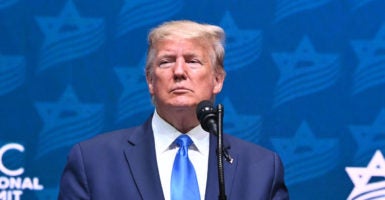 To make the charge stick, the impeachment inquiry must produce actual evidence for President Donald Trump’s specific, nefarious, impeachable intent to make Ukraine interfere in the 2020 presidential election. So far at least, it has failed to do so. Pictured: Trump speaks at the Israeli American Council National Summit Dec. 7, 2019, in Hollywood, Florida. (Photo: Noam Galai/WireImage/Getty Images)

The Democrats’ case for impeaching President Donald Trump boils down to this: the accusation that he solicited, demanded, perhaps even coerced a foreign government to help him get reelected. Such behavior, they contend, constitutes an impeachable offense.

The most important task for the Senate when it conducts a trial on that article of impeachment is to determine whether that is, in fact, what Trump did.

This is not America’s first impeachment. In the past, however, the facts were clear; the challenge was deciding whether the individual’s actions fell within the Constitution’s category of “treason, bribery, or other high crimes and misdemeanors.” This time, before even reaching that issue, the question is what Trump actually did.

There seems to be agreement about this much: Trump briefly put aid to Ukraine, as well as a White House meeting with its new president, on hold.

In a July 25 phone conversation with Volodymyr Zelenskyy, Trump urged the Ukrainian president to conduct two investigations. One focused on “this whole situation with Ukraine,” referring to accusations that Ukraine tried to influence the 2016 president election. He also spoke about whether former Vice President Joseph R. Biden “stopped the prosecution” of a company on whose board sat son Hunter Biden.

A month and a half later, the administration released the aid, even though Ukraine undertook neither of the investigations requested.

Nothing in that account, as far as it goes, amounts to an impeachable offense. The piece that makes or breaks the impeachment is the piece about which there is no evidence.

Democrats’ and their liberal allies have told us repeatedly just what that piece is. The House Permanent Select Committee on Intelligence report, for example, claims that Trump “solicited the interference of a foreign government, Ukraine, to benefit his reelection.”

After releasing this report, Rep. Adam B. Schiff, California Democrat and Intelligence Committee chairman, spoke of a “scheme to coerce an ally into doing the president’s political dirty work.” Trump was guilty, he said, of using “official power to compel another country, Ukraine, to interfere in the 2020 election.”

Law professors testifying at the Dec. 4 House Judiciary Committee hearing said the same thing. Harvard professor Noah Feldman asserted that Trump “abused his office by soliciting the president of Ukraine to investigate his political rivals in order to gain personal political advantage, including in the 2020 presidential election.” Stanford professor Pamela Karlan claimed Trump “did this to strong-arm a foreign leader into smearing one of the president’s opponents in our ongoing election season.”

In the absence of actual evidence, Trump’s critics have presented arguments such as “I wouldn’t put it past him,” “that sounds like something Trump would do,” or “I just know in my gut.” Sentiments, however, are not evidence. Even theories that appear to fit the facts are not evidence.

The possibility that, if Ukraine had conducted those investigations, Trump could have used the results to help his reelection, is not evidence of his intent either.

You might argue that it would have helped his chances. Then again, virtually everything a first-term president does could affect his reelection. If you believe that any president never chose what to do or how to do it with at least an eye (and possibly other senses as well) toward how it would affect his political standing, I have some oceanfront property in Utah to sell you.

How’s this for irony? On Nov. 13, as the Intelligence Committee’s first impeachment hearing opened, Schiff interrupted the Republican counsel’s questions to warn witnesses not to answer questions that “assume facts not in evidence.” With Schiff’s blessing, the House is about to impeach Trump by doing just that.