Supreme Court Should Keep NYC Gun Case in Its Sights 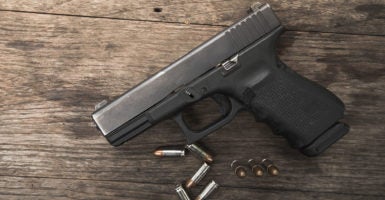 New York chose to abandon its law in an effort to stop the justices from ruling on whether the Second Amendment protects a particular scenario. (Photo: Woraphon Nusen/EyeEm/Getty Images)

It’s not often that the Supreme Court agrees to hear a Second Amendment case. It’s been nearly 10 years since the last one, despite numerous petitions asking the justices to review state and local government attempts to regulate away the right to keep and bear arms.

If you were fortunate enough to have a second home upstate, too bad. If you preferred a gun range across the bridge in New Jersey, tough luck.

Members of a local shooting club who challenged the regulations agreed to a lengthy briefing schedule after the Supreme Court granted review. This moved the case to the 2019-2020 term, giving the city time to revise its regulations in an effort to prevent the Supreme Court from ruling on its previous regime.

The city reasoned that it gave the shooting club members everything they wanted so the case is now “moot.”

The Constitution bars courts from issuing “advisory opinions” on hypothetical cases. One of the things that moves a case from the hypothetical realm to the real world is a court’s ability to grant some relief to the complaining party.

In New York’s view, the Supreme Court can’t grant any relief here, but the shooting club members disagree. They want a declaration that the old transportation ban is and was unconstitutional in order to prevent the city from reversing course in the future.

And under the Supreme Court’s doctrine of voluntary cessation, as Chief Justice John Roberts explained in a 2007 ruling, a defendant does not “moot” a case by willingly stopping the action that gave rise to the lawsuit unless it is “absolutely clear that the allegedly wrongful behavior could not reasonably be expected to recur.”

Shooting club members also object to the revised regulations, which now allow residents to transport licensed, locked, and unloaded handguns to gun ranges outside the city or second homes, but stipulate that any trip must be “continuous and uninterrupted.”

At the oral argument Dec. 2, the justices probed New York’s lawyer about this point. They wanted to know if stopping for coffee would violate the regulations. How about a short detour to a relative’s house? The city’s pinkie-swear promise that it wouldn’t go after those types of offenders wasn’t satisfying.

It takes a long time for most cases to work their way from initial filing up to the Supreme Court, and the justices take roughly 70 cases out of 7,000 petitions filed annually. This case took six years to reach the high court.

After six years of insisting that its regulations were both constitutional and necessary for public safety, it’s pretty clear what motivated the city’s 11th-hour change. Concerned about how the newly constituted Supreme Court might rule, the city chose to abandon its law in an effort to stop the justices from ruling on whether the Second Amendment protects a right that extends beyond the home.

The Supreme Court should not reward such skulduggery. To do so would send the message to localities, states, and even the federal government that they can thwart judicial review and avoid accountability under the Constitution.

Let’s hope the justices see through this ploy and keep this case in its sights.