The Digital Services Tax Hurts the French, Not the US 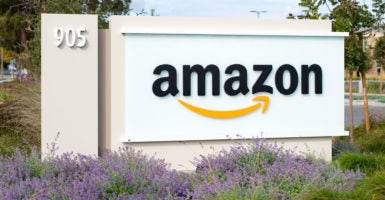 Like tariffs, the cost of the French tax falls almost entirely on French domestic businesses and consumers. Amazon already has begun to pass the cost on to third-party French sellers. (Photo: Smith Collection/Gado/Getty Images)

In response to a French tax on the revenue of U.S.-based tech companies, such as Google, Apple, Facebook, and Amazon, the U.S. is threatening to put tariffs of up to 100 percent on $2.4 billion of French cheese, champagne, and other exports.

The digital tax is already being paid by local French businesses and consumers through higher prices. Levying retaliatory tariffs on French imports punishes American families for the misdeeds of the French government. Instead, the U.S. should simply explain to the French people how their government is making it more expensive for them to access 21st-century services.

The French digital services tax is a 3 percent levy on revenue from sales of user data, digital advertisements, and online platforms run by companies with global revenues of more than €750 million ($832 million), of which at least €25 million comes from French users.

The revenue thresholds seem to be set to hit primarily American businesses and exempt most French firms. Global cronyism at its worst.

Because the French tax targets U.S. and other non-French firms, it acts as a tariff on imports. Sens. Charles Grassley, R-Iowa, and Ron Wyden, D-Ore., accurately described the tax as “unreasonable, protectionist, and discriminatory.”

The Treasury Department investigated this tax under Section 301 of the Trade Act of 1974 and found that the digital services tax “is inconsistent with prevailing principles of international tax policy, and is unusually burdensome for affected U.S. companies.” These findings permit the president to respond with reciprocal tariffs.

But the president should not use this authority.

Like tariffs, the cost of the French tax falls almost entirely on French domestic businesses and consumers. Amazon already has begun to pass the cost on to third-party French sellers. A similar Australian tax on digital downloads from overseas resulted in higher prices—in some cases, the price increase was more than the value of the tax.

Only 5 percent of the French digital services tax will be paid by the targeted large internet companies, according to a recent study from Deloitte. More than half will be paid by French consumers directly, and 40 percent will be paid by local French businesses that use the taxed digital platforms.

This tax in France and other similar proposals serve two goals.

And it enables European countries to use the threat of these new taxes on U.S. firms to coerce the U.S. to be part of the ongoing Organization for Economic Cooperation and Development work program to rewrite the international corporate income tax rules.

If the French succeed at bullying the rest of the world into these new rules, they will further destabilize the international tax system and lead to higher taxes on American and other international businesses, hurting workers and consumers.

The U.S. should refuse to participate in this process to abandon the physical-presence requirement for business taxation. Congress should reject any such plan.

Both the French tax and the threatened U.S. tariffs harm businesses and consumers. The president may be legally permitted to levy retaliatory tariffs—but American consumers would be harmed in the process.

If France wants to place new taxes on its own citizens, so be it. America can use our position to explain why such a move is terrible policy and hurts the French people. But let’s not punish American consumers for the policy blunders of the French government.

Tori Smith and Joel Griffith contributed to this commentary.