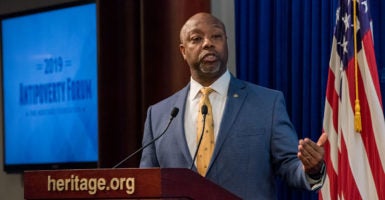 Instilling a sense of expectancy, personal capability, and American exceptionalism are keys to lifting individuals out of poverty, two conservative lawmakers said Thursday at a policy forum at The Heritage Foundation’s headquarters on Capitol Hill.

“The thing that really took me from being a kid, failing out of school, being a son in a single-parent household, being a person mired in poverty, really becoming more, was this notion that it was possible,” Scott said in a keynote address to attendees.

“The one thing my mother never lost was this sense of hope and wonder that this world, this nation, could afford her child opportunity,” he said. “And she was right.”

All the agencies and programs that government tries to offer can’t replace instilling the American ideal in those who have been caught in a cycle of poverty, the South Carolina Republican said.

“If we don’t find a way to embed within all the things that we do this notion of wonder about who we are, why America is exceptional, if we don’t restore as a part of the basic fabric of our organizations, our legislation, of our efforts, that all things are truly possible for all people no matter where they are … we won’t get there,” Scott said.

He said that school choice and apprenticeship programs are part of the answer to help students rise above their circumstances to pursue an education and a productive place in society.

“If we remember the importance of who the child will be and help that child learn in the natural direction that they are predisposed to … you find yourself having success that is unrivaled,” Scott said.

School choice programs are successful not just because of the enriched education they offer, but how they instill virtues in students, he said:

If we’re going to have successful school choice [programs], it’s because those programs understand equipping the child not just academically, but keeping the embers of hope and dreams. I’ve worked on legislation and my team is working on legislation that helps us reform our safety-net programs so as to not have a clip on our program, so that we can encourage work.

We encourage prosperity, but we encourage the development of a work ethic that allows you to get a raise and keep that raise without having all your benefits fall off a cliff.

Johnson, who chairs the Republican Study Committee, the largest organization in the House’s GOP conference, said one practical way his colleagues are working on to bring families and  communities out of poverty is by incentivizing marriage rather than penalizing it.

Federal welfare policy disincentivizes marriage, according to a 2014 paper from Robert Rector, senior research fellow in domestic policy at The Heritage Foundation.

If a single mother who makes $20,000 a year marries a man who makes the same amount, Rector wrote, the couple will lose about $12,000 a year in welfare benefits.

“We believe our job is just to create the right policy framework, to unleash communities, to take the lead on this, to empower people,” Johnson said in formal remarks. “Fixing policies that discourage marriage ought to be at the top of that list. And I can assure you, it’s one of the top priorities of all the members of the Republican Study Committee.”

He said the group’s American Worker Task Force, which aims to implement policies that encourage and unleash workers, is set to release a report in March that explores reforms for higher education, the job market, tax and regulatory policies, and welfare programs.

“I think we believe that our public policy in this country [is] to always emphasize not only education but the virtue of hard work, because that’s a pathway out of poverty,” Johnson said. “And we believe public assistance ought to be reserved for those that are truly in need. And when we squander those resources, we hurt the people.”