When China Acts on Expansionist Ambitions, We Must Respond 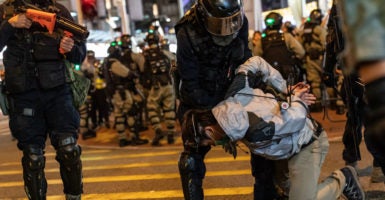 President Donald Trump has been tougher on China than any other president in my lifetime. Free from the baggage of Washington’s 40-year “normalization” consensus, the president can see China for what it is—an economically exploitative dictatorship that abuses human rights.

Thanks to Trump’s clear-sightedness, the executive branch is working to address the military, economic, and technological threats posed by China.

Most recently, on Nov. 26, the president signed the Hong Kong Human Rights and Democracy Act of 2019 into law.

As the bill made its way to the Oval Office, Hong Kong remained embroiled in pro-democracy protests. The ongoing protests were sparked by proposed changes to Hong Kong’s extradition law. Under the proposal, anyone accused of a crime by the Chinese Communist Party—American citizens included—could be extradited to mainland China.

But our new law is more than a reminder of America’s support for democracy. It’s the latest sign of a reorientation in America’s foreign policy.

This is a shift spurred by the president’s recognition that China is actively undermining our position as the world’s largest superpower. When China acts on its expansionist ambitions and threatens its neighbors’ sovereignty, we must respond.

American exceptionalism always has justified U.S. efforts to cement the nation’s position atop the world stage. But competition with China is different than previous competitions with economically productive countries such as, say, Germany or Japan.

Our competition with China more closely resembles our past challenge to the Soviet Union’s expansionism during the Cold War. As in that contest, the United States now faces a communist regime that forces some of its citizens into labor camps and denies them basic freedoms.

Unfortunately, we don’t have to rely on historical comparisons to outline life inside China’s sphere of influence. The people of Hong Kong currently are subject to that fate—and it’s not pretty.

Hong Kong’s chief executive is “elected” by a committee of 1,200 officials purposefully stacked in Beijing’s favor. A network of surveillance cameras crisscrosses the city, and residents’ every moves are recorded by the watchful central government.

Pro-democracy protesters at first evaded the cameras by covering their faces—until the government invoked martial law and imposed a mask ban. Police have shot protesters during the demonstrations.

The Trump administration is negotiating a fairer trade deal with China, challenging China’s theft of intellectual property, coming down hard on Chinese state-owned companies such as Huawei and ZTE, and beefing up our military.

Unfortunately, a divided Congress has stymied the development of a comparable legislative response. All of America’s elected officials should be working together to address the China threat.

Why hasn’t Congress passed a law banning federal retirement accounts from being invested in China? My bill, HR 2903, does just that.

The Department of Education is investigating foreign donations to U.S. universities, clamping down on a longtime influence scheme. Meanwhile, Congress has been slow to protect our universities from China. My bill, HR 1678, would require exchange students from adversarial countries to receive waivers before engaging in sensitive, national security-related academic research.

These two bills are just a small slice of the commonsense, China-facing legislation lost in the clamor of the 116th Congress.

The Hong Kong Human Rights and Democracy Act was closely aligned with the Trump administration’s foreign policy priorities and a big step forward for this Congress. But the China threat isn’t going away and will continue to require a two-pronged approach.

I hope my congressional colleagues accept the reality of 21st-century superpower competition. If they don’t, they will have failed America, Hong Kong, and the rest of the world.