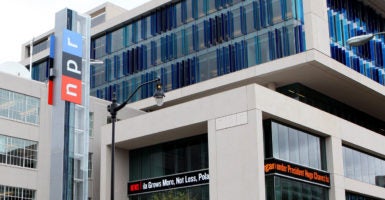 National Public Radio’s coverage of the story decided to highlight the Catholic faith of Roger Severino, director of HHS’ Office for Civil Rights, whose office issued the rule. Why? To imply that only a conservative Catholic would care about conscience rights? (Photo: Raymond Boyd/Getty Images)

Three different federal judges recently blocked the Trump administration from implementing a regulation that would give the Department of Health and Human Services additional resources to enforce more than two dozen laws related to conscience rights. The regulation had been scheduled to go into effect Nov. 22.

The rule is intended to provide the tools needed to enforce federal conscience laws that “protect providers, individuals, and other health care entities from having to provide, participate in, pay for, provide coverage of, or refer for, services such as abortion, sterilization, or assisted suicide.”

The rule also clarifies what these “protected” parties need to do to comply with conscience laws—record keeping, reporting, and non-retaliation requirements, for example.

A plain reading of the regulation itself—or, if you’re short on time, the HHS fact sheet or press release about the rule—makes clear that federal laws protecting rights of conscience are nothing new.

And that’s what has made mainstream media’s coverage of this issue so disappointing, to put it mildly. They seem almost incapable of treating conscience rights with the reverence they rightly accord other civil rights laws.

Take CNN and MSNBC for example, whose coverage of the judges’ action described the subject of the case as a “so-called conscience rule.”

There’s nothing “so-called” about it. It’s either a conscience rule or it’s not.

Furthermore, both outlets’ articles give readers the impression that the rule itself is what allows health care workers to decline to participate in certain procedures. The ability to opt out is the law— and it’s been the law for more than four decades.

Adding a “so-called” modifier is a thinly veiled attempt to undermine conscience rights and imply that such rights shouldn’t be viewed with the importance they deserve; as if they are somehow lesser rights.

Again, a plain reading of the rule, or the fact sheet, or the press release, makes clear that the rule merely provides for additional oversight and enforcement mechanisms to longstanding, current federal civil rights law.

National Public Radio’s coverage of the story decided to highlight the Catholic faith of Roger Severino, director of HHS’ Office for Civil Rights, whose office issued the rule. Why? To imply that only a conservative Catholic would care about conscience rights?

One is also tempted to award NPR bonus points for attempting to delegitimize the term “conscience rights” by putting it in scare quotes. But points are withheld due to lack of originality. Politico also used scare quotes in its tweet and its story about the ruling.

Let’s be clear: Americans enjoy the right to act in harmony with their moral and religious beliefs—not just in houses of worship or the privacy of their homes, but also in the public square, including at work.

Respecting rights of conscience in the context of health care used to be a bipartisan goal, broadly supported by liberals and conservatives alike.

Conscience rights statutes didn’t just magically appear in federal law out of nowhere; they are there because duly elected members of Congress across the political spectrum voted to put them there.

Issues like abortion, sterilization, and assisted suicide will undoubtedly remain contentious, but respecting the rights of individuals and organizations to dissent on morally sensitive issues can be safeguarded in a free society through robust protections of individual conscience.

Conscience rights take nothing away from anyone. The freedom to live in accordance with one’s conscience is a fundamental American principle. A robust respect for these rights—both in government and among private citizens—enables us to live and work alongside each other despite differing viewpoints on a host of ethical and moral matters.

By putting conscience rights in scare quotes and misrepresenting an agency rule designed to safeguard this fundamental civil right, the mainstream media demonstrates its hostility toward anyone who dissents.