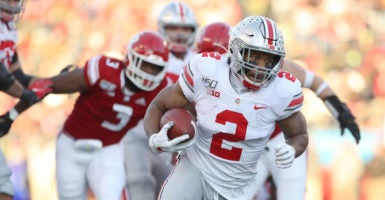 J.K. Dobbins of the Ohio State Buckeyes carries the ball in for a touchdown in the first quarter against the Rutgers Scarlet Knights at SHI Stadium Nov. 16, 2019, in Piscataway, New Jersey. (Photo: Elsa/Getty Images)

“When my dad was alive, he would tell me, ‘No matter what, have a smile on your face. No matter how you’re feeling, you’re living, and you should be able to smile.'”

These days, Ohio State running back J.K. Dobbins has a lot to smile about. He just moved into second place on the Buckeyes’ all-time rushing list. He racked up four touchdowns against rival Michigan over the weekend. He’s a contender for the Heisman Trophy. But things haven’t always been easy. J.K. had to overcome a lot of obstacles to get where he is—including, Americans found out Saturday, just being born.

One of the first things people notice about Mya Dobbins’ son is his grin. Despite watching his single mom struggle to go to school and provide, despite seeing his father—the man he was closest to in the world—die of a stroke in the Bartlett State Jail, and despite an ankle injury almost costing him a future in football, J.K. stays upbeat.

“I have a positive outlook on life, because I’m still living,” he said last year. No one knew how close the college junior came to not living until last weekend, when Fox sportscaster Gus Johnson explained that the world wouldn’t be watching this incredible talent if Mya hadn’t chosen life.

Late in the fourth quarter, after more than 8 million viewers had watched J.K. spring into the end zone, another commentator shook his head in amazement. “What does this kid not do?”

While J.K. was on the sidelines being congratulated, Johnson started sharing the powerful story of a teenage mom, who was one clinic visit away from making J.K. Dobbins a name this country had never heard of.

“[J.K.’s] mom, Mya, became pregnant when she was 18 years old,” he started. “She went to the doctor because she was thinking about aborting the baby—but changed her mind. That baby turned out to be that young man, J.K. Dobbins,” he added, “who she calls her ‘miracle baby.'”

The idea that the sports world might never have witnessed his gift for the game was overwhelming to Johnson—and everyone else—in that moment. It crystallized, in one half-minute of television, what the abortion debate is all about. Maybe that’s why liberals are so upset.

When the clip went viral, social media lit up with angry posts about how “inappropriate,” “unnecessary,” and “stigmatizing” the testimony was. Others even called it “disgusting,” demanding that Johnson apologize. For what? Most people wanted to know. For rejoicing that a world-class talent wasn’t destroyed in the womb? “Think about how backwards this is,” RedState argued. “[Liberals] think it’s ‘disgusting’ to talk about not aborting someone.”

That’s because, in their minds, abortion is a social good. Something to be celebrated, cheered, and plastered in pink lights across the New York City skyline.

“We didn’t need to know all that,” one woman tweeted about the OSU junior. In other words, don’t put a face on it. Don’t remind us what abortion costs us. “Dobbins is a talented player,” one woman agreed, “but let’s just let him be talented … We can’t take choice away from Ohio’s women because of one feel good story about a football player.”

But that’s the problem. It isn’t just one feel good story. The world will never know how many millions of stories there would have been if more moms had been told the truth: that their babies had value and purpose and potential—not because of what they could do, but because of who their creator made them to be.

J.K. was fortunate. But for every baby like him, there are so many others whose lives are ended before they begin. Theirs are the 60 million voices we’ll never hear, performances we’ll never see, and Heisman winners we’ll never meet because of abortion.

If Mya’s story can save just one of them, those 24 seconds of live television will mean more than any football legacy ever could.