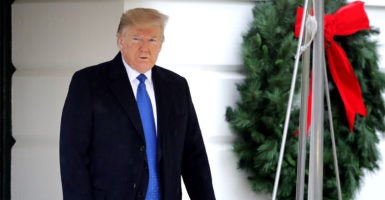 President Trump’s visit with troops in Afghanistan was yet another reminder that he is willing to go to the ends of the Earth to protect America’s interests. Pictured: The president departs the White House on Monday to travel to London for meetings with fellow NATO leaders. (Photo: Chip Somodevilla/Getty Images)

It was not a happy Thanksgiving for President Donald Trump’s detractors, as the president showed with his surprise trip Thursday to Afghanistan that “America First” is not a code term for isolationism.

Trump’s visit with U.S. troops, his meeting with Afghan President Ashraf Ghani, and his announcement that the U.S. has reopened peace talks with the Taliban showed that America is in anything but retreat.

By now, it should be clear to everyone that accusations claiming Trump is really an isolationist are bogus.

Most recently, when Trump announced a shift in Syria policy, he was accused of “abandoning the Middle East.” Over time, the facts on the ground didn’t bear that out.

Now we know that the U.S. brokered a cease-fire between Syrian and Kurdish forces that undoubtedly helped avoid needless bloodshed. America continues to fight the Islamic State terrorist group and work with the Kurds, and no adversary has realized any real gains from the shift in the U.S. footprint.

Still think the isolationist label sticks to Trump? How does that square with his action in signing legislation supporting the people of Hong Kong in their struggle with China?

Now the U.S. is on record to support the effort of Hong Kongers to retain the political and economic freedoms that Beijing promised to honor when Britain returned Hong Kong to Chinese control.

Trump faced tremendous pressure from Beijing to veto that legislation. He didn’t. That doesn’t jibe with the notion that the president wants to turn his back on the free world.

Trump’s trip to Afghanistan was yet another reminder that he is willing to go to the ends of the Earth to protect America’s interests. Keeping the Taliban from overrunning Afghanistan is key to peace and stability in South Asia, and to blocking a resurgence of the likes of al-Qaeda.

Trump differs from his predecessors in that he seeks neither to solve all the world’s problems nor to ignore legitimate threats to U.S. interests. What he is trying to do is establish a credible and sustainable global footprint that makes clear to adversaries that the U.S. is no pushover and it doesn’t intend to become one.

To that end, Trump has pushed friends and allies to bear their fair share of the peace-and-stability load. He has pushed U.S. forces forward not to fight endless wars or act as the world’s policeman, but to safeguard our interests and partner with those who share our vision for a peaceful, prosperous global space.

Afghanistan is a case in point for what can be called the Trump Doctrine. Trump shifted the mission of U.S. forces there from fighting a war to providing advice and support for the Afghan people. He made a commitment to stick it out. And he offered the Taliban an off-ramp from the conflict.

Trump has made similar offers to all of America’s competitors: Iran, Russia, China, and North Korea.

The president’s trip to Afghanistan demonstrates his continued resolve to follow through. No doubt, Trump was also pleased to spend time with the troops he loves—and to let them know how thankful he and the entire country are for their service and sacrifice.

The Trump Doctrine—and any responsible foreign policy—cannot succeed without our courageous men and women in uniform. The president clearly appreciates their patriotism and all they do for our country.