Impeachment Crusade Is Bound to Backfire on the Left 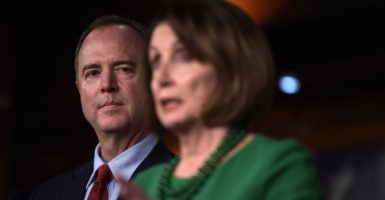 As the impeachment season drones on, and Democrats continue down the path of self-destruction, one wonders if there is an exit ramp for them.

Before Donald Trump was even the Republican nominee for president, people in positions of power started their malevolent acts against him and his campaign, mostly in private. Democrats and the left entered this path and have been locked onto that course for more than three years now.

Democrats have publicly sprinted down this path since the day after Trump was elected. It is well documented, for instance, that Rep. Al Green, D-Texas, expressed his desire to impeach the president within mere months of his assuming office.

Hillary Clinton then stoked the “Russian collusion” hoax to explain what was inexplicable to her: the American voters had rejected her in favor of political outsider Donald J. Trump.

The left’s first major goals out of the box were (1) to remove the president from office and, if that didn’t work, (2) declare Trump’s presidency to be illegitimate due to foreign influence in the 2016 election.

The earliest ideas often receive the most traction, even if they are not the best ideas. Suboptimal trajectories build up over time, not necessarily because they are the right course, but because they were first and get locked in even as better options come along.

So here we are. It’s 2019 and Democrats have committed themselves to expelling Trump from office, or if that fails, simply dragging his name through the mud.

It is folly to try to remove a president from office when the people will be able to make their own decision in less than a year. And despite Democrats’ best efforts to throw allegations at him, Trump receives consistently favorable numbers in regular polling.

Recent polling further suggests that voters are souring on the idea of impeachment.

This week, the House Judiciary Committee is bringing in several law professors to harangue the committee and to provide justification for impeachment. Intelligence Committee Chairman Adam Schiff, D-Calif., has suggested that he might need to bring in additional witnesses.

Every time he has brought in witnesses promising blockbuster revelations, he has only produced duds. Democrats have yet to see these hearings produce any overwhelming evidence in their favor.

An alarm bell should be going off among Democrats when their chosen path to remove a sitting president is not bicameral or bipartisan, and opposition to impeachment is both. The facts scream that they are marching on a suboptimal path that might lead them over a cliff.

Why do Democrats persist?

It is likely that they believe the short-term cost of political embarrassment and demoralizing their base is too high. But stubbornly adhering to their chosen course is reckless if they want to appeal to a broader America. This won’t end well for them.