Chick-Fil-A Donated to Southern Poverty Law Center, Others on Left 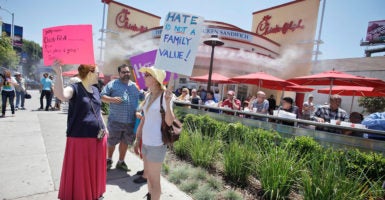 Chick-fil-A, which has promoted itself as a Christian business, is now under fire from both sides of the aisle for its charitable giving strategy. Pictured: Demonstrators protest outside a Chick-fil-A restaurant in California on Aug. 1, 2012. (Photo: Tibrina Hobson/Getty Images)

Chick-fil-A donated to the Southern Poverty Law Center and other left-wing organizations that promote abortion and LGBT rights, issues that run counter to the fast-food chain’s image as a Christian conservative business.

According to public tax documents first reported Tuesday by Townhall, Chick-fil-A donated $2,500 to the Southern Poverty Law Center in 2017 despite the organization’s history of hostility toward conservative causes.

SPLC is known for its controversial practice of designating conservative or religious organizations across the country as “hate groups” if those groups oppose left-leaning causes such as abortion on demand, same-sex marriage, or government coercion of faith-based businesses.

“Not only has Chick-fil-A abandoned donations to Christian groups including the Salvation Army, it has donated to one of the most extreme anti-Christian groups in America,” Family Research Council President Tony Perkins said Wednesday in a prepared statement.

“Anyone who opposes the SPLC, including many Protestants, Catholics, Jews, Muslims, and traditional conservatives, is slandered and slapped with the ‘extremist’ label or even worse, their ‘hate group’ designation,” Perkins said.

Southern Poverty Law Center was linked to domestic terrorism when a gunman who stormed the Family Research Council’s Washington headquarters in 2012 admitted that he targeted the organization after seeing it on SPLC’s “hate map” showing the locations of groups that oppose its agenda. He carried Chick-fil-A sandwiches with him, police said.

A spokesperson for Chick-fil-A Inc. told The Daily Signal in an email that the donation to SPLC “was made by a volunteer member of the Chick-fil-A Foundation Advisory Board.”

“Each volunteer adviser, in 2017, was offered the opportunity to recommend a grant recipient,”  the spokesperson said Wednesday.

Other organizations that received grants from Chick-fil-A in 2017, the spokesperson said, include Meals on Wheels, the Holocaust Survivor Support Fund, and Emory University’s brain health research unit.

Chick-fil-A has come under fire recently from some conservatives for announcing that it has ended multiyear donations to conservative charities criticized by LGBT activists, including the Salvation Army and the Fellowship of Christian Athletes, leading some to call for a boycott of the restaurant chain.

>>> Commentary: Chick-Fil-A, Your Compromise Is Demoralizing

In a letter Tuesday to Chick-fil-A CEO Dan Cathy, nearly 50 conservative leaders, including Heritage Foundation President Kay Coles James, criticized the company for “bowing to the pressure of left-wing extremist groups” and called on Cathy to rethink the company’s approach to charitable giving.

“[Y]our latest decisions to withdraw charitable giving to the Salvation Army and other Christian charities has betrayed the very people who stood with you,” the letter says. “You have instead allied yourself with a bully-tactic leftist movement that will never be satisfied with your compromises.”

The letter added: “There is a growing list of American corporations that have discovered, with each new compromise, [that] leftists only become more emboldened in their attacks.”

Besides the Southern Poverty Law Center, the 2017 tax records reveal that other groups that oppose conservatives received donations from Chick-fil-A, among them:

—YWCA USA, which is criticized for abandoning its Christian roots and becoming an abortion rights and pro-LGBT organization that has partnered with Planned Parenthood.

—Pace Center for Girls, an education group that welcomed feminist icon and abortion rights activist Gloria Steinem as a keynote speaker at its recent annual summit.

Conservatives across the country long have supported Chick-fil-A for its Christian business practices, such as closing on Sundays. But leaders on the right say they find it increasingly difficult to square the restaurant chain’s Christian image with its recent charitable-giving decisions.

“It’s time for Christians to find a fast-food alternative to Chick-fil-A,” Perkins said.