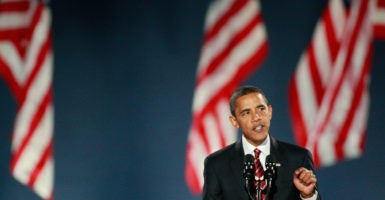 In November 2008, the American people elected the country’s first black president. I remember the night clearly—or as clearly as one can given the copious consumption of cabernet sauvignon that night.

As I watched the returns at my small Manhattan apartment, Fox News’ Brit Hume called the presidential election for Democratic Sen. Barack Obama of Illinois. As a supporter of Sen. John McCain of Arizona, the Republican nominee, I was deeply disappointed.

But my angst began to fade when the historical significance of what had transpired took hold: America was made whole.

Despite that election, woke practitioners of identity politics have steadily threatened the massive gains in fundamental justice we have achieved.

Slavery is America’s original sin. To end that tyranny, Americans took up arms against each other, with an estimated body count of 625,000.

That was not enough to repair America, however. We had to contend with the vestigial pathologies and crimes that slavery wrought: segregation, lynching, Jim Crow, discrimination, redlining, and the disruption of the black nuclear family.

We passed civil rights laws, desegregated schools, and hearts and minds were won because Martin Luther King Jr. taught us that “when the architects of our republic wrote the magnificent words of the Constitution and the Declaration of Independence, they were signing a promissory note to which every American was to fall heir.”

While President Barack Obama’s tenure was a political failure, the historic meaning of his twice-elected presidency remains: America made good on that promissory note.

Prophetically, in 2004, Obama—then an Illinois state senator—admonished that year’s Democratic National Convention in words that every American school-aged child should memorize: “There is not a black America and a white America and Latino America and Asian America. There’s the United States of America.”

This foundational principle, however, is under assault by identitarian determinists, academics who take intersectionality seriously, and ignorant college students who shout down people who disagree with them.

Perennially self-important, The New York Times has gotten in on the action, reserving for itself the right to redefine America’s founding from 1776, when the Founding Fathers declared America’s independence from Great Britain, to 1619, when the first African slaves arrived in Britain’s Virginia colony.

Those developments are, in a word, regressive. They do violence to Obama’s dictum. Taken together, they hold that America does not consist of one people united by a common language, culture, tradition, creed, and citizenship, secured by the legal force of the Constitution and the moral suasion of the declaration. Rather, the morality of the tribe governs.

Whether organized by race, ethnicity, sex, sexual preference, or religion, each tribe has a political mandate to pursue the presumed monolithic interests of its membership. To entertain moral agency is to concede to systems of oppression.

If the cultural and political regression that identitarianism represents were benign, we could write it off as misguided enthusiasm for a bad idea. Instead, this malignant, new tribalism ravages “e pluribus unum” with the vigor of aggressive cancer.

We fought an actual civil war, and responsible Americans should not welcome a “cold” one now.

Obama and another historic American, the now-deceased Supreme Court Justice Antonin Scalia, had little else in common politically, but both recognized the necessity of a unified America.

In Adarand Constructors Inc. v. Pena, 515 U.S. 2000 (1995), in which the Supreme Court held that courts must apply “strict scrutiny” to federal affirmative-action programs, Scalia presciently diagnosed our current malady and offered the cure:

Individuals who have been wronged by unlawful racial discrimination should be made whole; but under our Constitution, there can be no such thing as either a creditor or a debtor race. That concept is alien to the Constitution’s focus upon the individual. …

To pursue the concept of racial entitlement—even for the most admirable and benign of purposes—is to reinforce and preserve for future mischief the way of thinking that produced race slavery, race privilege, and race hatred.

In the eyes of government, we are just one race here. It is American.

To achieve “a more perfect union,” we must ensure it is the only identity that matters.