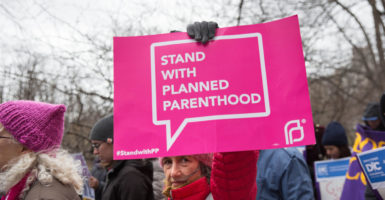 Planned Parenthood wanted to introduce comprehensive sex ed, including curriculum on sexual orientation and gender identity. Pictured: An activist lifts signage during a rally as part of the national "March for Health" movement in front of Trump Tower on April 1, 2017, in New York City. (Photo: Kevin Hagen/Getty Images)

Michael King is the director of community alliances at the Massachusetts Family Institute.

Worcester, the second largest city in solidly blue Massachusetts, was the scene of a sex ed showdown between Planned Parenthood and concerned parents and church leaders. Last February, more than 75 of those parents and church leaders stood up alongside the Massachusetts Family Institute to outnumber pro-Planned Parenthood voices at a meeting of a local school committee.

The parents, church leaders, and Massachusetts Family Institute officials were there to pose a question: What would Planned Parenthood gain from teaching students about safe sex that would reduce both pregnancies and abortion? How would that benefit a business that relies heavily on income from abortion?

To further expose what is going on in Massachusetts schools, we interviewed a young man who recently had been exposed to this curriculum. In this brief video (viewer discretion advised) pasted below, he explains what students are being taught and how sexual behavior and abortion are being completely normalized.

The Massachusetts Family Institute is working with local churches to introduce positive curriculum alternatives to Planned Parenthood’s version because many parents want their children to be taught to value abstinence and marriage. The organization is working with several churches in Lawrence, Massachusetts, to convince local school officials to adopt curriculum that is truly age-appropriate, medically accurate, and evidence-based.

Our organization believes there is a Biblical mandate to protect the minds of young people from being polluted and seeks to build on its success in Lawrence by replicating this strategy all over the state.

Over the past three years, the Massachusetts Family Institute has spoken at about 125 different churches across the state. Churches are starting to see that their Biblical mandate, as Martin Luther King Jr. explained, is to be the conscience of the state and never its slave. Relationships between local churches, parents, and pro-family groups are strategic.

Ultimately, in Worcester, the school committee voted to not allow the “Making Proud Choices” curriculum from Planned Parenthood into the schools.

We succeeded in defeating Planned Parenthood and protecting the minds and hearts of our young people in Worcester. But parents, community leaders, and pro-family advocates can team up anywhere to strengthen the family, life, and liberty.