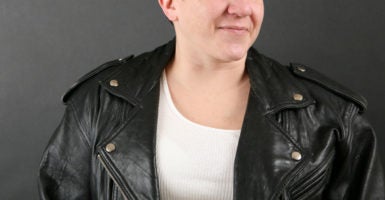 At age 19, Kathy Grace Duncan decided she was ready to live as a man. “Before I went to kindergarten, probably ages 3 to 4, I would ride my tricycle over to get my girlfriend, pick her up. We were going to get married,” she recounts. “So I knew that I wanted to be a boy, and I would play like a boy.”

But eleven years after her gender transition, Duncan decided she was now going to live as a woman again.

She joins the podcast to share what happened. Read the lightly edited interview, posted below, or listen on the podcast:

The Daily Signal podcast is available on Ricochet, iTunes, Pippa, Google Play, or Stitcher. All of our podcasts can be found at DailySignal.com/podcasts. If you like what you hear, please leave a review. You can also leave us a message at 202-608-6205 or write us at letters@dailysignal.com. Enjoy the show!

Daniel Davis: I’m joined now by Kathy Grace Duncan. She is a transgender survivor and she’s here to share some of her story. Kathy Grace, thanks for your time today.

Davis: My first question for you, Kathy Grace, is when in your life did you first begin to think that you were a man? You know, we hear more and more stories these days of people who have gone transgender, some of whom have have now reversed and very often this begins in childhood. Was that the case for you?

Duncan: Yes, absolutely. So before I went to kindergarten, probably ages 3 to 4, I would ride my tricycle over to get my girlfriend, pick her up. We were going to get married. So I knew that I wanted to be a boy, and I would play like a boy. So it was definitely way before kindergarten.

Davis: OK. And at what point did you decide to actually begin to live as a man?

Duncan: When I was 19. I started taking hormones and then changed my name.

Davis: OK. I would imagine this wasn’t very well known or a common thing at the time. Was there a medical procedure that you had to go through?

Duncan: Yeah, I was evaluated by a psychologist and then he referred me to a family doctor who prescribed the hormones. … He wanted to be sure that this is something I really wanted to do. There wasn’t really the, “Why did you want to do this?” Or any of that. It’s just like, “OK, well, let me get you to this doctor and he’ll give you the hormones for it.”

Davis: And how did that affect you?

Duncan: At first it seemed slow, but then within three months my voice had dropped and [I was] starting to have the peach fuzz for the beard and all of that. And then eventually I started having male pattern baldness and I worked out. So I actually, honestly, took a little bit extra so I could get big as I worked out.

Davis: … As this process went, as you were transitioning, did you ever have any moments of regret at this point or were you still on board for it?

Duncan: I don’t think through the whole time that I lived as a man I had any regret because I thought I was free. I thought living this way was where I was supposed to be my entire life.

Davis: So how long did you continue in this pattern?

Davis: And then what changed your mind?

Duncan: Well, actually, an encounter with Jesus. So four years prior to that, I believe that he started working on my heart to bring me out of that. And he called to me and he said, “Will you now? Will you now?” And I took this inventory of my life and I thought, “I haven’t got anything to lose, nothing holding me back.” So I said yes. And I jumped in to spending more time in the word and at church and getting more involved in the church.

And then at the end of that four years, which would have been the end of ’11, I was confronted by my church and they asked me who I was and I told them “I’m a woman living as a man.” And the Holy Spirit blew into me. And when that happened I realized, “Oh, I need to go back to being the woman that God created me to be,” and stepped down from all these ministries.

Davis: Wow. Were you raised in the church?

Duncan: I was raised Lutheran, so I would say sort of. I knew who God was, but I didn’t really follow him necessarily.

Davis: So your upbringing would have taught you that this was not right, to live as the opposite sex?

Duncan: Yeah. But when you’re so driven by it, it’s hard to know that that’s true.

Davis: So really it was your encounter with Christ and your faith that that brought you out of transgenderism?

Duncan: Yeah, yeah. Him showing me that, “This is not the best for you. This is not how I created you.”

Davis: So how has your relationship with God shaped your identity from that time onward?

Duncan: Well, in the beginning I spent lots of time with him, just saying, “I don’t know what I’m doing. What is this supposed to be like?”

And because of the way I looked from the effects of the hormones, I was like, “OK, so, Lord, you need to change all of this. You need to take away the beard. You need to grow my hair back.” I cried out for all of these physical changes. And finally the Lord said to me, “I don’t care about those things. I’m really after your heart.”

And that’s when I realized, OK so there’s a heart change that needs to happen. So it was just continuing to spend time with him and realizing that who he created me to be was good. The word said it was good. He created male and female and they were very good.

So it was learning how to embrace that and then also addressing the lies that I believe that pushed me to be a man. Part of it was growing up in a dysfunctional family, I believed that women were hated, women were weak, women were vulnerable, and I didn’t want that. I didn’t want to grow up and be those things. And so being a man was the only other option that I felt was good and I’d be able to survive that.

Davis: And as you’ve embraced being a woman, have you found yourself becoming more at peace in that? Because we’ve been hearing some stories of people who say they transition to the other gender because they always felt that they were at odds with their body. Have you felt more at peace in being a woman?

Duncan: Yeah. I would say that as I’ve understood the truth about who I am and how we’re created and how he’s wired me, there is [peace]. When I come into agreement and I understand the lies that drove me to that, then I’m able to see what the Lord is calling me to.

Duncan: And that was, again, coming back to my relationship with the Lord and trusting him that he knew what he was talking about.

Davis: Well, there’s a push nowadays to get children younger and younger to think in terms of gender identity and to try to figure out their own gender irrespective of their body. And it puts a lot of pressure on kids and we’re hearing stories come out of kids transitioning, going through puberty blockers. What would you say to a young kid who’s confused about their gender and is considering this?

Duncan: Sure. I think rather than addressing that symptom—because really that’s all it is, is a symptom of a deeper something that’s going on—it’s trying to look past and asking the why. “Why do you want to live as a man? Why do you think that that’s better? Why do you think it’s safer? Why is your gender bad?”

And exploring what [are] the ideas around that and then addressing those things. Because usually it’s a place of trauma, or perceived trauma, for them that says, “Oh, this is not good. Who I am is not good.” And detaching from that and actually becoming hateful of your own self. And that was one of the things I really had to deal with was deep, deep self-hatred just because I was a woman.

And so it’s looking at that in those young kids. And then I think also it’s kind of like that wait and see. Yeah, they’re struggling now at 5—because gender dysphoria does start very, very young—but it’s seeing how they grow up. Where are you at in age 12? Because some of the kids, girls especially, when they’ve been heavy-duty tomboys, when they reach 15, 16, they’re like, “No, I want to be a girl. I like being a girl.”

Duncan: They totally grow out of that.

Davis: Yeah. That’s a point that often gets missed in the debate is that you’re putting young kids before puberty on puberty blockers. Well, after puberty they might change their mind. They’re still developing. Right?

We’ve heard about boys identifying as girls going into girls bathrooms, locker rooms. What would you say to lawmakers who are thinking about this?

Duncan: Well, I guess my question for them would be, “Have you considered the emotional health? Have you looked at these kids emotionally?” Yeah, they’re saying, “This is what I feel,” but your feelings can lie to you and I can tell you that they lie to you. The way you feel is not always the truth. They need to look underneath all of that.

“I feel that I’m a boy.” OK. “Why do you feel that you’re a boy?” I would encourage them to look at, do you have the data around the emotional health of that child?

And looking at the data for those who have already gone through that and have the regret and the emotional trauma that they’ve gone through, and now they can’t really change back necessarily or fully change back.

So I would encourage them, you need to look beyond the symptoms and you need to get to the cause. What is the root cause of that before you pass any laws about gender identity and boys going into girls’ bathrooms? Because I think that also produces predatory habits. You know, the boys that realize, “Oh, I can say I’m a girl and go into the girls’ bathroom.” We have predators among us, too. And so they just need to look beyond the symptoms.

Davis: OK. Kathy Grace, I really appreciate your sharing from your story and for your time today.