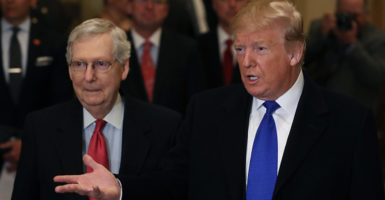 As House Democrats continued their impeachment push, President Donald Trump scored yet another victory toward reshaping the federal judiciary—flipping a third appeals court to a majority of Republican-president nominees.

Moreover, as the House engaged in partisan bickering, the Senate voted to confirm Barbara Lagoa to the U.S. Court of Appeals for the 11th Circuit in Atlanta on a bipartisan vote of 80-to-15 on Wednesday. The circuit—which handles cases out of Alabama, Florida, and Georgia—now has a 7-to-5 majority of Republican appointees.

Since taking office in January 2017, Trump also has been able to change the makeup of the Manhattan, New York-based U.S. Court of Appeals for the 2nd Circuit to a 7-to-6 Republican-appointee majority and the Philadelphia-based U.S. Court of Appeals for the 3rd Circuit to an 8-to-6 majority of appointees of Republican presidents.

“With the confirmation of Judge Barbara Lagoa to the [11th] Circuit, President Trump has now transformed three of the nation’s federal appellate courts from Democrat-appointed majorities to Republican-appointed majorities. This is a major achievement for his presidency,” Carrie Severino, chief counsel and policy director for the Judicial Crisis Network, tweeted after the confirmation.

Trump has won 46 appeals court confirmations by the Senate, according to The Heritage Foundation Judicial Tracker, in just under three years in office. That’s double that of his predecessor, President Barack Obama, who had 23 appeals court judges confirmed during his eight years in office.

Since appeals courts decide the overwhelming majority of court cases, because the Supreme Court can only handle a limited number of cases each year, these confirmations are highly important.

“This success—along with the record number of federal appellate judges President Trump has appointed to date—is a testament to the tangible impact the president has had in reshaping the federal judiciary with constitutionalist judges who are committed to the rule of law,” Severino added.

Florida Gov. Ron DeSantis named Lagoa to the state’s high court after she previously served as a state appeals court judge and before that as an assistant U.S. attorney. She was also the chairwoman of the Florida Judicial Ethics Advisory Committee from 2015 to 2016.

The judge also has a personal story that impresses Severino.

“Lagoa’s parents fled Castro’s Cuba, and their experience gave her a deep and abiding respect for the rule of law,” Severino tweeted. “The first Cuban-American woman to sit on the [11th] Circuit, Judge Lagoa will solidify the follow-the-law jurisprudence exemplified by the court’s new majority.”

“I thank Justice Lagoa for her years of service in both the federal and Florida state justice systems, including as a justice on the Supreme Court of Florida,” Rubio said in a statement. “I am confident Justice Lagoa’s experience will serve her well as she begins the next chapter of her service to our nation as a U.S. circuit judge for the [11th] Circuit.”