I Left England Because of Socialized Medicine. My Life Depended on It. 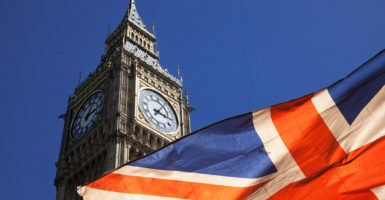 "Health care should not be a reason to have to leave a modern, First World country," writes James Schmitz. (Photo: melis82/Getty Images)

James Schmitz is a member of the Young Leaders Program at The Heritage Foundation.

Imagine strapping your infant child into a car seat, only to see his body suddenly jerk forward or backward, arms and legs stiffening, and eyes rolling back in the head.

Alarm quickly turns to panic, which turns to frantic weaving through traffic to get to the hospital. Within minutes of arriving, the child is rushed in for treatment with a team of neurologists by the bedside carefully taking notes.

That child was me.

My parents sat in shock, with tears streaming down their faces as my fate was unknown. I was quickly whisked to the CT scanner, and later that night a neurologist told my mother, her tearful eyes full of sorrow and hurt, “Your child has West syndrome, a severe form of epilepsy.”

She continued, “We have very few options for treatment, and the ones we can try may not work. There is over a 90% chance he will never be able to speak, walk, eat, or think. His impairment will be indefinite.”

Because time was of the essence, I was treated almost immediately with Adrenocorticotropic hormone (ACTH). This wasn’t a new drug and was not considered a “cure.” I had to have constant supervision, at least a weekly check, from a neurologist while on the drug.

Remarkably, I found myself in the top 1 percentile of people with West syndrome who could enjoy a mostly normal life. Thanks to the top-notch medical treatment I’ve receive in America, I can do most of the things the neurologist predicted I wouldn’t be able to.

It wasn’t until after college that I realized just how uniquely American my story is.

After graduating college, I had an opportunity to work for a think tank in London. There, I’d be just hours away from the wonders of mainland Europe.

Britain is a historian’s paradise, so naturally as a history major, I was soaking it up. The idea of also going to Pompeii or Rome was spectacular.

The only thing standing in my way was a doctor to treat me abroad.

As an epileptic, I needed a steady supply of anti-seizure drugs and visits to the doctor about every three months to make sure everything was working as it should. I also needed a doctor to be available within a week’s time if necessary.

I didn’t know how hard it would be to find a doctor in Britain. I remember having a very difficult conversation with a general practitioner. It was the moment my dream of staying abroad was crushed.

It was a Friday. After work, I walked into an urgent care clinic to set up an appointment with a neurologist.

I knew how easy it is in the United States to see a doctor, so I thought this would be no different. I would go in, get a recommendation, and walk out with a name and number to call on Monday for an appointment possibly in two weeks’ time.

Sadly, that was not the case. The doctor said, verbatim: “I can recommend a neurologist for you. I will say, she’s pretty booked so you won’t see her for at least nine months.”

I was shocked. I felt as if I’d been blindsided. She wasn’t even guessing. She worked at a nearby National Health Service hospital right down the street on the weekends, so she knew.

I asked if there was anything I could do to expedite the waiting process. In response, all I got was: “I’ll call my colleague and see if she could maybe squeeze you in maybe three to four months from now.”

Disheartened by the news, I knew staying in the U.K. was out of the question. I had to return to the U.S. in order to keep accessing the routine medical care that had saved my life so many years before.

A month later, I packed my bags and left for Heathrow Airport having spent less than three months in the country. It’s a shame, because Britain is an amazing country and I would have loved to stay longer. Health care should not be a reason to have to leave a modern, First World country.

What’s at Stake for America

I am writing this not just to relate a sad story, or to say how lucky I am, or to shock my readers. I write this so that everyone who reads it will understand what’s at stake in our health care debates, and what good, responsive health care is for someone who relies on it to live a fruitful life.

I cannot go a day without taking medicine or without knowing if I’ll be able to see my doctor in a timely manner. My life is only made possible by the high-quality care and access I get in the United States. It’s something other countries don’t enjoy.

Yet today, some Americans want U.S. health care to move in the direction of Britain and Europe. Prominent House and Senate Democrats are pushing “Medicare for All” legislation that would outlaw private insurance, cost Americans trillions of dollars, and put countless American patients on waiting lists like the one I faced.

The outcome of this ongoing debate will impact Americans for generations to come. We can’t afford to decide our future based on wishful thinking. Americans need to know what socialized health care is like.

In England and Canada, it is standard for patients to wait twice as long as in the U.S. to see a specialist, according to the National Community Pharmacists Association. In fact, nearly 1.8 million people are currently waiting for a hospital admission or outpatient treatment in the U.K.

People from all around the world come here every year to receive medical care they can’t access in their home countries. We should consider what we have that they don’t, and make sure we protect it.

I’ve experienced firsthand what it’s like to live in a country that can meet my health care needs, and to live in one that can’t. Given the choice, I’d pick the U.S. system every single time. My life depends on it.