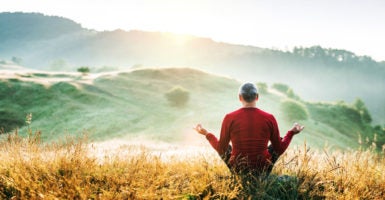 The government held a meditation conference at a luxury retreat in California where the “whole government” was planning on coming, and it occurred during the longest government shutdown in history. (Photo: Halfpoint Images/Getty Images)

The federal government hosted a “Mindfulness & Resiliency Summit” in August where 450 employees from the IRS and other agencies spent two days receiving new-age wisdom, learning to meditate, and receiving on-site massages, photos of the event and a website show.

Participants sat through an hour of talks before taking a half-hour “stretch and self-care break.” Next, they heard a 90-minute talk from Gretchen Rohr, an activist working for George Soros’ Open Society Foundations who presented about “restorative justice” and overcoming “trauma,” according to a schedule obtained by The Daily Caller News Foundation.

Then they adjourned for a two-hour lunch and returned for two hours of advice from Ashanti Branch, who teaches “young men of color” to “hold safe space.” He presented a bizarrely capitalized PowerPoint that included lines such as “the Longest distance most people Travel is the 18-inches between their head and their heart,” a photo shows.

They let out at 4 p.m. to rest up for the next day, the schedule shows.

The two-day summit took up a combined 7,200 hours of federal employees’ time.

The session also included ABC News correspondent Dan Harris hawking advice from his self-help book “10% Happier: How I Tamed the Voice in My Head,” according to a conference booklet, which is called an “Inspirational Journal” and encouraged attendees to “doodle.”

On-site massages were also offered, according to pictures of the venue, presentations, and materials obtained by The Daily Caller News Foundation.

The second day was dominated by presentations from Michelle Reugebrink, who works full-time as the Forest Service’s “Mindfulness & Resiliency Program Manager with the Work Environment & Performance Office,” at a $102,000 salary, pay records show.

“Our mind is an instrument do not let it play you,” Reugebrink taught in one PowerPoint presentation. “Our minds can give us fake News … recognize how easy it is to take personally so many things.”

“They are narratives ………. Like why I am not good enough? Who would I be without that thought? If they had what we had or we had what they had,” it continued.

In a profile on the Forest Service’s website, Reugebrink said:

Forest Service employees include firefighters who can experience life-threatening situations, but it is unclear why employees of the IRS and others would need to learn about meditation, “trauma,” and “restorative justice.”

At another conference appearance, Reugebrink also revealed the government held a meditation conference at a luxury retreat in California where the “whole government” was planning on coming, and that it occurred during the longest government shutdown in history—a stalemate over federal funding in early 2019.

“We started the Mindfulness Compassion Inclusivity Summit, and 1440 Multiversity helped host us,” Reugebrink said. “It was beautiful … we held it in January, and we had big plans for the whole government, like, to come and then we got furloughed. So I did it on my own.”

She made those remarks at a Wisdom 2.0 Conference in March, which Reugebrink said she’d attended for the past seven years. She spoke about “Mindfulness in the Federal Government” in an interview with host Soren Gordhamer, who also presented with her at the August government conference.

“How do you actually have a job teaching mindfulness as a firefighter?” Gordhamer asked with a laugh.

“It’s been a journey,” she said. “I started seeing a lot of change in me. And I had a conversation with leadership: What would it look like if we got out of our own way? What if we taught mindfulness-based stress reduction in the government and see what happened? And I can tell you I have 2,000 people in my class right now for the winter MBSR [mindfulness-based stress reduction] class.”

Reugebrink said she had employees from FEMA, the Office of Personnel Management, and the IRS, and that it was also open to nongovernment employees.

“Who OK’d this, by the way?” Gordhamer asked, with the audience bursting into laughter.

“Civil rights … that’s where the most movement happened,” she replied. “The civil rights director and deputy, the chief of the forest service, I went and talked with Congressman Tim Ryan.”

She said she offers “monthly guided meditations and mindfulness webinars on a different theme. Last month is happiness, this month is self-compassion.”

On her YouTube channel, she teaches about “20 minute sitting,” in which she invites federal workers and others to simply sit and stare blankly ahead for 20 minutes. They should not become “attached” to any thoughts, and concentrate on their breathing instead, she said.

Reugebrink is a regular presenter at events like the Forest Bathing International Conference, which is held by a for-profit organization. The 2019 conference was sponsored by the Forest Service.

The U.S. Forest Service is another proud sponsor of our upcoming Forest Bathing International Conference. We’re honored to be working an organization whose mission so closely aligns with our own.

In forest bathing or forest therapy, people participate in “healing activities that can be incorporated into a walk in a forest or any other natural area.” At the association affiliated with Forest Bathing International, trainers who specialize in social justice and social change charge $3,170 to teach people how to teach others about forest bathing.

Meghan Rodgers, a political appointee who serves as press secretary for Secretary of Agriculture Sonny Perdue, did not respond to repeated questions about the mindfulness conferences, including what meditation had to do with diversity or civil rights.