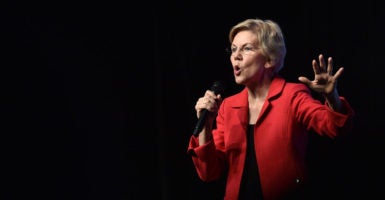 Whenever leftists are charged with not loving or even with hating America, they respond angrily, labeling the question absurd, mean-spirited, and an example of right-wing McCarthyism.

Here are six reasons to believe the left hates America:

This, of course, makes no sense. Leftists around the world agree on every important issue. Why, then, would they differ with regard to America? Has any leftist at The New York Times, for example, written one column critical of the international left’s anti-Americanism?

More recently, Massachusetts Sen. Elizabeth Warren announced that she plans to “fundamentally transform our government,” that America needs “big, structural change,” and that her proposed Accountable Capitalism Act would bring about “fundamental change.”

Likewise, Vermont Sen. Bernie Sanders said earlier this year, “We’re going to try to transform the United States of America,” and last month he said, “This campaign is about fundamental change.”

So, here’s a question: How can one claim to love what one wishes to fundamentally transform?

The answer is obvious: It isn’t possible.

3. Leftists have contempt for the American flag.

I am unaware of a single left-wing individual or organization that has condemned NFL quarterback Colin Kaepernick for refusing to stand for the flag during the playing or singing of the national anthem that precedes NFL games. To the contrary, on the left, he is universally regarded as a hero. Indeed, Nike anointed him as one, making him its brand model.

Leftists might respond that Kaepernick’s public refusal to stand for the flag and national anthem says nothing about his love for America, as it is only a form of protest against racial injustice. But that is nonsense. Would leftists argue that anyone who publicly refuses to celebrate Martin Luther King Jr. Day really loves Dr. King?

4. Leftists routinely describe America as racist, sexist, xenophobic, imperialist, genocidal, homophobic, obsessed with money, and morally inferior to most Western European countries. No moral person could love such a place. As one person commenting on a Paul Krugman column wrote, “Does loving your country mean you love or ignore the fact that we destroyed Iraq, shot down an Iranian commercial airliner, and waged a brutal war in Asia for reasons that today make no sense?”

5. America is the most successful country in world history—while being the most committed to capitalism and remaining the most religious of all the industrialized democracies. To the extent that America is great, that means two of the institutions the left most loathes—Christianity and capitalism—are also great.

6. Love is, among other things, an emotion. So, here is a question about leftists’ emotions: Do any leftists get the chills when the national anthem is played or when they see the American flag waving as the anthem is played? Given their rhetoric, it is most unlikely. Yet, every person I know who loves America does get a chill at such moments. Do leftists, as opposed to some liberals and conservatives, display the flag on any national holiday? How many leftists even own a flag?

Finally, if leftists do not love America, what do they love?

According to their own rhetoric, they love the planet—Mother Earth, as they frequently refer to it. And they love animals.

They really love power, and they claim to love material equality.

They don’t love Western culture—and they now dismiss praise for it as a euphemism for white supremacy.

Interestingly, while they often claim to love humanity, many don’t seem to love people. They give less charity and volunteer less time to the downtrodden than conservatives, for example. They have much less interest in having children and making families. They are far more likely than conservatives to cut off relations with friends or relatives with whom they differ politically. And if they really loved people, they would love capitalism because only capitalism has lifted billions of people from poverty.

But most of all, they love … themselves.