We Hear You: Oberlin College’s ‘Lawsuit Mess’ With a Local Bakery 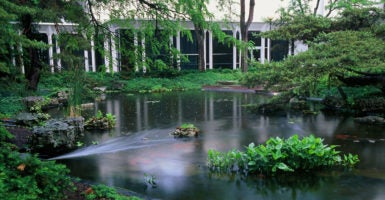 "I had to look up the facts myself after receiving Oberlin College's email, to find out what had actually transpired," Keely Dien writes. Pictured: The fish pond at Oberlin College Conservatory is a tranquil sight. (Photo: Getty Images)

Editor’s note: Welcome back to some of the intriguing missives from The Daily Signal’s mailbag. Don’t forget to write us at [email protected].—Ken McIntyre

Dear Daily Signal: I enjoyed reading the transcript of Rob Bluey’s enlightening podcast interview with Cornell law professor Bill Jacobson of the Legal Insurrection website about the judgment in the case of Gibson’s Bakery v. Oberlin College (“Conservative Law Professor Challenges Campus Left on Free Speech (and Wins Them Over)”).

I am an alumna of Oberlin College, class of ’92, and have watched with dismay, but not surprise, the lawsuit mess with Gibson’s Bakery. I have received Oberlin’s emails and letters on the subject, which were very one-sided, and did not even include the very basic fact that it began with a student who had shoplifted at the bakery.

I had to look up the facts myself after receiving Oberlin’s email, to find out what had actually transpired. Again, unbelievable to me, but not a surprise.

It is most likely that none of my six children are going to consider or apply to Oberlin College. I would rather use tuition dollars more wisely. I do financially support a student organization on campus, one that has a higher calling than do Oberlin administrators.

I appreciate your bringing to light Mr. Jacobson’s experiences and his approach to our woefully uneducated college students and wider society.

Maybe we could get some bumper stickers or yard signs made along the lines of his observations and answers to students’ questions. Just kidding, I don’t want to put a target on my car or home!

You have my permission to reprint my email as a letter to the editor. I myself am encouraged, by reading others’ letters and articles such as Rob Bluey’s, to know that we are not alone in our traditional, hopefully fair-minded and thoughtful values. One would get that idea from the mass media—and as such it has limited input in our home.

Keep up the good work, as it is needed now more than ever. Voices of calm in the hysteria are much appreciated.—Keely A. Dien, Fountain Valley, Calif.

Thanks for Melanie Israel’s commentary article on an abortion doctor’s cruelty, “Discovery of Fetal Remains at Abortionist’s House Shows the Cruelty of Abortion.”

I would like to suggest that as pro-life citizens we drop calls for making abortion facilities cleaner, safer, and so on, for the mothers. The cleanest facility in the world is still truly the prenatal equivalent of a gas chamber.

Would we call for well-regulated clinics for mothers to take their nagging 2-year-olds for termination, or would we persist in calling for the termination of policies that allow such evil? Would we pretend that the only thing undignified about the practice is the burial method, or would we insist the practice itself must be stopped?

We need to careful, honest, and wise in our advocacy for the unborn.—Karen Cox, Waynesboro, Ga.

A reply from Melanie Israel, research associate in The Heritage Foundation’s DeVos Center for Religion and Civil Society:

It doesn’t have to be an either/or calculation. Court jurisprudence is clear that the state has an interest in protecting not just unborn life, but also maternal health and safety. We care about both. Kermit Gosnell didn’t just kill unborn babies; he killed a mother too, and her death was a preventable tragedy.

Clinic regulations help keep butchers like Gosnell from harming moms and babies. Furthermore, awareness about the serious health and safety deficiencies in abortion clinics can help deter women from choosing that route in the first place.

Dear Daily Signal: The commentary by Anthony Campeau and Paul J. Larkin Jr. begins to address the issues of the federal bureaucracy (“How Trump’s New Executive Orders Protect the Public Against the Administrative State”). The real issue is that Congress is the body that must act on regulations instead of relinquishing responsibility to a faceless bureaucracy.

Judging by their commentary, President Trump is taking some good steps. One of the biggest problems is that the ordinary citizen is not always aware of due process and can become intimidated by the regulator. Therefore, it is incumbent upon Congress and the bureaucracies to ensure that citizens are protected from arbitrary acts.

Congress should ensure that the regulations are constitutional and that there is due process. The regulatory agencies must adopt strict procedures to ensure individuals do receive due process.—Philip G. Daspit, Florida

It’s been many years since unions were member advocates, while trying to ensure companies stay profitable. Thank you for this timely expose.—Betty Mayes, Wichita, Kan.

Those on the left who seek to destroy President Trump over the Ukraine incident have selective memories, conveniently overlooked the following presidential precedents:

And he is still at it, coming out in public support of Justin Trudeau in Canada’s election.—Jon Metes

When I went into the military in 1960, we took an oath that included the words “enemies both foreign and domestic.”

Our country is now infested with “domestic enemies” that are trying to disrupt and destroy our government. How do we start to fulfill our oath?—Marty K.

Here is my proposal for dealing with the current mess in Washington, D.C. Let’s move our nation’s capital to Salinas, Kansas.

Yes, the swamp would move there over time, but it might buy our republic 50 years or perhaps more. Go ahead, say I’m crazy, but think about the idea every now and then.

And let’s set the prevailing wages of Congress, the executive branch, and Supreme Court employees equal to the current prevailing wages in Kansas.  It makes more sense to me every time I consider it.—William H. Pound, Bozeman, Mont.

I have waited for a long time to find a source of truth. I hope and pray that you at The Daily Signal are my answer.—Shirley Simons

You are one of the very few who care about your readers’ opinions. Thank you. That’s called communicating.—R.W. Van Dyke

I appreciate your news and find it very interesting. Wish we had this in South Africa.—Francoais Benjamin Schutt

Great website, very informative. One of the best.—Jack Olson

You are doing just fine so far. Keep it up!—Terence Dusseault