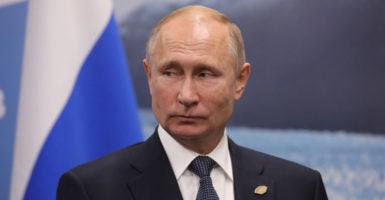 We are already in a conflict with Russia, even if we don’t know it. But the future battles of this conflict won’t necessarily be ones fought over territory, using tanks, troops, or warplanes. Rather, we will fight Russia in cyberspace and on the information battlefields. Pictured: Russian President Vladimir Putin at the G-20 Leaders Summit in Buenos Aires, Argentina, Nov. 30, 2018. (Photo: Ludovic Marin/AFP/Getty Images)

KYIV, Ukraine—As the Russian shells and rockets rained down on them in the frontline town of Debaltseve in February 2015, Ukrainian troops began to receive curious, anonymous text messages on their cellphones.

The messages also claimed that Petro Poroshenko, Ukraine’s president at that time, as well as Ukrainian military commanders, had “betrayed” their soldiers.

The Ukrainian military later concluded that Russian military forces had taken over the local cellphone network with mobile jamming stations.

The text messages were part of a psychological operation against Ukrainian troops—not too different in its intent from dropping propaganda leaflets from airplanes, a psychological warfare technique that dates back to World War I as a way to demoralize troops.

“Fake news is a weapon,” my friend Viktor Kovalenko told me.

Kovalenko, who is a former journalist and a Ukrainian army combat veteran of the Debaltseve battle, added: “Via fake news, Russians wanted to defeat Ukrainians the same way … as by artillery and tanks.”

In Ukraine, Russian military forces have combined World War I and II era weapons and tactics—such as artillery bombardments, tank attacks, and trench warfare—with weapons unique to the 21st-century battlefield, such as cyberattacks and sophisticated social media propaganda campaigns.

In 1943, in the midst of World War II, British air chiefs declared that the objective of their Combined Bomber Offensive was “the progressive destruction of the German military, industrial, and economic systems and undermining the morale of the German people to a point where their armed resistance is fatally weakened.”

That edict from the 1940s sounds a lot like the goals of contemporary Russian hybrid warfare.

We have entered a new era of conflict, one in which a country’s power on the world stage is no longer measured by its economic, military, or diplomatic might. Rather, the audacious use of disinformation to shape public opinion at home and abroad allows a country like Russia to punch well above its weight class in shaping world events.

Russia is the master at this game. The U.S., for its part, is struggling to keep up.

In 2014, the United States and the European Union levied punitive economic sanctions on Moscow for its aggression in Ukraine. Since then, relations between Russia and the West have hit a post-Cold War nadir.

Using cyberwarfare and an empire of weaponized propaganda, Russia has embarked on a hybrid war blitz against Western democracies. Looking back, it’s clear that Ukraine was the opening salvo of Russia’s ongoing war against that American-led, democratic world order.

Russia has used the war in Ukraine as a testing ground for both its modern conventional and hybrid warfare doctrines, providing a case study for the new kinds of security threats the U.S. and its Western allies can anticipate from Moscow.

U.S. military forces in Europe have wisely taken note and are leaning forward to anticipate how Russia might integrate multiple warfighting domains into a hybrid military offensive.

Russian hybrid warfare is not covert warfare. Rather, it’s the combined use of conventional military force with other means, such as cyberattacks and propaganda—both on the battlefield and deep behind the frontlines.

In conventional warfare, the effects of combat are limited to the ranges of the weapons used. In hybrid warfare, however, the battlefield knows no limits.

The old paradigms of the justice of war—which include metrics such as the proportionality of the use of deadly force—are being challenged in this era of hybrid warfare. For instance, is it ethically defensible to launch lethal airstrikes in retaliation for a cyberattack?

Compounding these ethical dilemmas, hybrid warfare is inherently designed to create battlefield confusion, primarily in the command-and-control process, clouding the situational awareness of both front-line troops and their commanders.

For Western militaries, which prefer precision strikes with minimum risk of collateral damage, that kind of confusion can be paralyzing.

There’s no doubt that America’s military is superior to Russia’s. U.S. defense spending in 2018 reached $649 billion, compared with Russia’s $61 billion that year. Economically, too, Russia is far from America’s peer with a gross domestic product about half that of California’s—roughly on par with South Korea’s.

Yet, in this new era of hybrid warfare, Russia is able to threaten U.S. security interests and undermine the stability of the democratic world order without resorting to direct military action.

Instead, by shifting the burden of conflict escalation onto its adversaries, Russia tests whether our leaders, in the West, are willing to retaliate against nonlethal, so-called “gray zone” activities with lethal military force. Thus, despite its conventional weaknesses, Russia is a hybrid superpower with an unparalleled ability to control the world’s attention economy.

Russia has weaponized information by deploying its state-run media organizations to undermine Western societies and democratic institutions. And, taking advantage of historically low levels of confidence in journalism, Russia’s information warfare is precision-targeted on Western populations through the internet and social media.

These activities have manipulated and inflamed divisions within American society—often turning Americans against each other.

Wednesday’s impeachment hearings were clear evidence of the current vitriol of American politics and how intractably divided our society has become. This new status quo should worry Americans of every political persuasion. Above all, it is a win for Russia.

In one of his most famous World War II speeches, British Prime Minister Winston Churchill said:

In our own time, we are already in a conflict with Russia, even if we don’t know it.

But the future battles of this conflict won’t necessarily be ones fought over territory, using tanks, troops, or warplanes. Rather, we will fight Russia in cyberspace and on the information battlefields.

Above all, we will fight for the sovereignty of our citizens’ minds.

And, in the end, we must recognize that the true origin of the threats against our nation comes from abroad and not fall into Russia’s trap by fighting against ourselves.