The Judiciary Loses When Judges Get Political 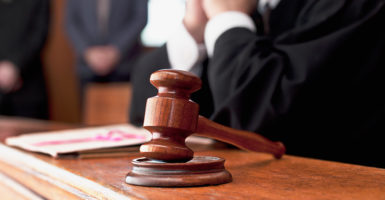 "The integrity of our system of government rests on every judge’s shoulders," writes GianCarlo Canaparo. (Photo: Chris Ryan/Getty Images)

Politics is like mud wrestling. No one comes out clean.

And as recent comments by Senior Judge Paul Friedman of the U.S. District Court for the District of Columbia show, that holds especially true for judges.

Friedman has a point, but he does more harm than good in making it. Yes, some of Trump’s criticisms of judges have been too hot, but Friedman accomplishes nothing by entering the fray.

On the contrary, he only contributes to the increasing perception among the American people that judges are just politicians hiding their partisan agendas behind black robes.

No institution has more to lose by being covered in political muck than the judiciary. Impartiality and the appearance of it are paramount to the judiciary’s integrity.

The Code of Conduct for United States Judges hammers that theme home. It explains that public confidence in the judiciary’s impartiality is indispensable to justice. And when the judiciary loses the public’s confidence, it “injures our system of government under law.”

For that reason, the code forbids judges from engaging in political activities.

In fact, the code prohibits a lot of behavior that non-judges take for granted: serving on the board of a public company, accepting certain gifts, participating in political organizations, making speeches for or against politicians, donating to political causes, engaging in “any other political activity,” and more.

Judges don’t even have the luxury of setting their personal priorities as “[t]he duties of judicial office take precedence over all other activities.”

Judges are judges first, individuals second, and aren’t supposed to do anything that “detract[s] from the dignity of the judge’s office” or “reflect[s] adversely on the judge’s impartiality.”

It’s a monastic calling, and it should be.

The integrity of our system of government rests on every judge’s shoulders. Every judge is an ambassador for a judiciary whose effectiveness depends on its ability to preserve untarnished in the minds of the American people the ideal of Lady Justice.

Judges succeed as Lady Justice’s ambassadors the way courthouse columns succeed at holding up a classical entablature: By upholding the rule of law “without fear or favor.”

Friedman, who was appointed by President Bill Clinton, seems to have forgotten the code. That’s understandable, because judges are people, after all, with all the same passions as the rest of us, which are easily inflamed in these hyperpartisan times. But it’s still not excusable.

Anyway, what good can Friedman do the judiciary by entering the political fray? Can he stop the president from attacking judges? Certainly not.

Can he reassure the public that the judiciary is above the fray? Not while he’s standing in it.

Judges’ perceived impartiality depends on them staying above the fray. It defies human nature to let an attack go unanswered, but judges have to. More than their pride is at stake.

That’s not to say the judiciary is without a defense for political attacks. Others, especially lawyers, teachers, and civic-minded citizens, should come to their defense when warranted.

Judges can also preempt political attacks by teaching people about the value of the separation of powers and an independent judiciary.

But when judges enter the political mud pit, even for good reason, they just get mud on their robes.