Obama Tried to Discriminate Against Conservative Faith Groups. Trump Is Reversing That. 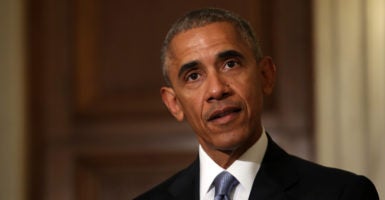 The Trump administration is reversing key parts of an Obama administration rule that had blocked faith groups from accessing federal grants if they refused to place children with gay couples. (Photo: AP Photo/Yorgos Karahalis/Pool/Anadolu Agency/Getty Images)

Several faith-based adoption agencies have been tangled in litigation over allegedly “discriminating” against prospective parents. Thankfully, a new Trump administration rule could alleviate some of their legal battles, protect religious liberty, and help kids in need of adoption.

On Nov. 1, the Department of Health and Human Services proposed a new rule that would reverse key parts of a 2016 rule issued by the Obama administration.

The 2016 rule barred the agency from giving out grants to organizations—like adoption agencies—who refused to place children with same-sex couples. This new rule would roll back that regulation and require the agency to avoid discriminating against private entities who operate according to their faith, according to federal nondiscrimination law.

Health and Human Services stressed that “the federal government not infringe on religious freedom in its operation of HHS grant programs and address the impact of regulatory actions on small entities.”

While the announcement didn’t explicitly mention adoption agencies, it could very well affect the faith-based adoption agencies that receive federal grants and which have been accused of using their faith as a guise for bigotry, because they believe marriage should be between a man and a woman.

Some state leaders, like Michigan Attorney General Dana Nessel, have been trying to force faith-based adoption agencies to change their religious beliefs about marriage or else close their doors.

The state’s main target has been St. Vincent Catholic Charities. Even though St. Vincent had placed children with same-sex couples, the state went after it because it wouldn’t organize adoption home studies with gay couples—something the state required of grant recipients.

Nessel flashed her own bigoted views on Twitter earlier this year.

The judge who ruled on this case, Robert Jonker, pointed out the state wasn’t just targeting St. Vincent’s public actions, but its belief system. He said “the state’s real goal is not to promote nondiscriminatory child placements, but to stamp out St. Vincent’s religious belief and replace it with the state’s own.”

In March, Michigan reached a settlement, along with the ACLU, against the Michigan Department of Health and Human Services, St. Vincent Catholic Charities, an adoptive family, and a former foster child who had joined the suit.

The settlement affirmed a 2015 law that said groups that receive state funds and refuse to provide foster care or adoption services that conflict with their religious beliefs are actually in violation of federal anti-discrimination laws.

Fortunately, this settlement was challenged and a federal judge ruled in their favor in September, halting the attorney general’s discrimination campaign.

In his opinion, Jonker clearly found that the discrimination at work was not St. Vincent’s bigotry guised as faith, but state animus toward religious organizations, even ones whose specific aim is to help needy children find loving homes.

The Trump administration’s newly proposed rule would affirm rulings like this.

While many mainstream news organizations are framing this new proposal as one that will now allow faith-based adoption agencies to “discriminate,” the more accurate way to view it is that it would roll back the anti-discrimination rules Obama had implemented during his administration.

Those rules were a veiled attack on religious liberty and the consciences of faith-based families and adoption agencies.

Obama claimed it was discriminatory for faith-based agencies to live in accordance with their belief that marriage is between a man and a woman, a pretty standard teaching among many mainstream religions in America.

In reality, it is far more discriminatory for the state to require people, an organization, or a business to suspend their religious beliefs or violate them.

Upending these unconstitutional provisions is the right thing for the Trump administration to do, but it’s not clear how much this will help faith-based adoption agencies who are currently fighting discrimination lawsuits.

It all depends on whether states acquiesce to the new rule or continue to fight in court. While this proposed rule would remove the threat of the federal government stepping in under a federal anti-discrimination law, it wouldn’t necessarily prevent the states from engaging in these legal battles.

St. Vincent’s isn’t the only adoption provider caught up in this legal fight. Bethany Christian Services and Catholic Social Services are engaged in a similar fight with Philadelphia’s Department of Human Services.

In addition, the New York State Office of Children and Family Services has been suing New Hope, a religious nonprofit, because it prioritized placing children in homes with a married heterosexual couple.

That’s four faith-based organizations that could continue to live by their Christian beliefs if the respective states honored the newly proposed rule. But of course, that’s not guaranteed.

It’s nearly impossible to pinpoint exactly how many children might be affected by this new rule. But we can get an idea by looking to Michigan.

When Jonker ruled in the adoption agencies’ favor, he pointed out that “Michigan has a chronic shortage of foster and adoptive homes” and that there were “approximately 13,000 children in foster care, about 2,000 of whom have a permanency goal of adoption.”

The state works with 57 agencies, most of which are private.

“[I]n the last four fiscal years,” he said, “St. Vincent has served an average of 74 children in its foster care program every year, and through its work over 100 adoptions for foster children were finalized.”

It’s not entirely new for federal agencies to introduce regulations that reflect a particular administration’s policy agenda, but it is a serious problem when an administration’s executive actions become the de facto means of lawmaking. That’s not how the Constitution requires laws to be made.

In this case, President Donald Trump isn’t making new policy. He’s undoing bad policy that was a gross overreach when the Obama administration introduced it.

There was no law directing Health and Human Services to expand anti-discrimination laws, but former President Barack Obama went ahead and did it anyway, just before his final term expired.

Trump is simply undoing this—not only for the betterment of faith-based adoption agencies and the needy kids they serve, but for the rule of law and the regulatory agency that would enforce it.