Young People Might Reject Socialism If They Knew These Facts 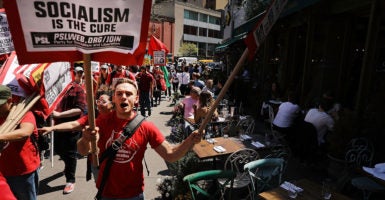 Protesters participate in May Day demonstrations in New York City on May 1, 2018. (Photo: Spencer Platt/Getty Images)

A recent survey conducted by the Victims of Communism Memorial Foundation and polled by YouGov, a research and data firm, found that 70% of millennials are likely to vote socialist and that 1 in 3 millennials saw communism as “favorable.”

Let’s examine this tragic vision in light of the Fraser Institute’s recently released annual study “Economic Freedom of the World,” prepared by professors James Gwartney of Florida State University; Robert A. Lawson and Ryan Murphy of Southern Methodist University; and Joshua Hall of West Virginia University, in cooperation with the Economic Freedom Network.

By the way, after having fallen to 16th in 2016, the U.S. has staged a comeback to being in the top five economically free countries in the world.

What statistics go into the Fraser Institute’s calculation of economic freedom?

The report measures the ability of individuals to make their own economic decisions by analyzing the policies and institutions of 162 countries and territories. These include regulation, freedom to trade internationally, size of government, sound legal system, private property rights, and government spending and taxation.

Fraser Institute scholar Fred McMahon says, “Where people are free to pursue their own opportunities and make their own choices, they lead more prosperous, happier, and healthier lives.”

The evidence for his assessment is: Countries in the top quartile of economic freedom had an average per capita gross domestic product of $36,770 in 2017 compared with $6,140 for bottom quartile countries. Poverty rates are lower.

By the way, Argentina and Venezuela used to be rich until they bought into socialism.

During the Cold War, leftists made a moral equivalency between communist totalitarianism and democracy. W. E. B. Du Bois, writing in the National Guardian (1953) said, “Joseph Stalin was a great man; few other men of the 20th century approach his stature.”

Michel Oksenberg, President Jimmy Carter’s China expert, complained that “America [is] doomed to decay until radical, even revolutionary, change fundamentally alters the institutions and values,” and urged us to “borrow ideas and solutions” from China.

According to professor R.J. Rummel’s research in “Death by Government,” from 1917 until its collapse, the Soviet Union murdered or caused the death of 61 million people, mostly its own citizens. From 1949 to 1976, Mao’s communist regime was responsible for the death of as many as 76 million Chinese citizens.

Today’s leftists, socialists, and progressives would bristle at the suggestion that their agenda differs little from that of past tyrants. They should keep in mind that the origins of the unspeakable horrors of Nazism, Stalinism, and Maoism did not begin in the ’20s, ’30s, and ’40s.

Those horrors were simply the result of a long evolution of ideas leading to a consolidation of power in the central government in the quest for “social justice.”