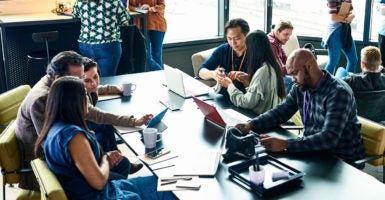 Our country is becoming more diverse with each passing day, but Republican staffs seem to be getting whiter. Until our party views diversity as an asset to be celebrated, and not as a burden to bear, we will continue to lose state and national elections. (Photo: Getty Images)

Virginia Republicans got their heads handed to them on a silver platter in legislative elections Nov. 5. Democrats now have a majority in the state General Assembly for the first time since 1995, and they also hold the governorship.

Virginia used to be a solid red state for Republicans. Now, the Old Dominion is the proverbial canary in the coal mine for both the state and national Republican Party.

I moved to Virginia in 1989 from St. Louis to be part of the incoming George H.W. Bush presidential administration. I used to be very involved in the state Republican Party and various Republican campaigns. I was the first black person to be elected national committeeman for the Young Republicans of Virginia, a statewide office that you had to run for.

I worked with Republican Govs. George Allen, Jim Gilmore, and Bob McDonnell; Lt. Gov. John Hager; and state Attorney General Mark Earley. They all had a great understanding of the necessity of expanding the base of the Republican Party, at both the state and national levels.

Their campaigns and official staffs reflected the demographic makeup of Virginia. We had an active, functioning state party. Because these officeholders all valued diversity, we were able to take control of both chambers of the legislature.

In the November 2013 elections, we lost all three statewide offices to the Democrats, but we still had a slender majority in the state legislature until last week, when Democrats won outright control.

Democrats currently control the governor’s office, and in January, they will have total control of the state government for the first time since 1993.

Virginia is a wake-up call to both our state and national parties. Far too many of the party’s leaders have bought into an unwise “white turnout” approach to elections across the country. That approach calls for focusing on white turnout and depressing turnout within the black community by going negative.

Our country is becoming more diverse with each passing day, but Republican staffs seem to be getting whiter. Until our party views diversity as an asset to be celebrated, and not as a burden to bear, we will continue to lose state and national elections.

Far too often, Republicans hire blacks in the political arena who they would never hire for their private-sector companies. Message to Republicans: If you wouldn’t hire a person to work in your private-sector business, then don’t hire them to work within the party. Hiring a black person is not the same as hiring the right black person for your staff. Far too frequently, Republicans hire blacks as race “insurance”: “I have a black person on my staff; therefore, I can’t be a racist,” or so the thinking goes.

Most of the black staffers I see have few or no ties to the black community, and many don’t have the necessary skills set for the jobs for which they were hired.

Republicans tend to hire blacks they are comfortable with, rather than someone who knows what the heck they are doing.

Republicans can no longer afford to be the white party. We must begin to reflect the true makeup of America. When you look at the Republican Party, you should see America 2019, not America circa 1950.

I’m committed to helping the party look more like America. The easiest thing for me to do would be to leave the party, but that’s not happening.

To borrow a line from an unlikely source, Barack Obama, in another context: “Change will not come if we wait for some other person or some other time. We are the ones we’ve been waiting for. We are the change that we seek.”

I’m going to continue to be what I am looking for.