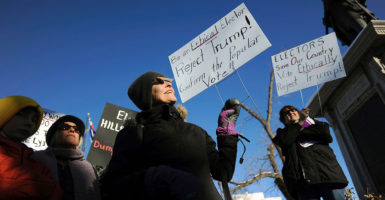 The results of the 2016 election left some activists on the left convinced that the Electoral College is unfair. Pictured: Protesters in Denver on Dec. 16, 2016, sound off on the election of Donald Trump. (Photo: AFP/Getty Images)

The Electoral College is under threat from states looking to enact legislation that ignores local voters in favor of national election results, experts said during a panel Thursday at The Heritage Foundation.

Responding to a wave of 15 states that have joined the National Popular Vote Interstate Compact since the 2016 election, they argued that the Founders instituted the Electoral College to ensure stability and representation to all states.

“We only got the Constitution because the Constitutional Convention persuaded the states to enter into a federation arrangement,” Allen Guelzo, a history professor at Gettysburg College, said. “Federalism is in the bones of our nation, and I would be concerned that we can’t start removing bones without the whole body collapsing.”

The panel, titled “The Fight to Preserve the Electoral College,” featured Guelzo as well as Trent England, executive vice president of the Oklahoma Council of Public Affairs, and Hans von Spakovsky, a senior legal fellow at Heritage.

The National Popular Vote Interstate Compact is a legislative partnership among states that agree to award all their electoral votes in future elections to whichever candidate wins the national popular vote, disregarding the results of ballots cast in each individual state.

The compact would take effect only once enough states join to determine an election by awarding all 270 electoral votes needed to secure a presidential win.

So far, 15 states and the District of Columbia have joined the compact. Lobbyists actively are looking to expand the agreement to more states whose leaders were upset by the results of the 2016 election, when Republican Donald Trump won the presidency despite losing the national popular vote to Democrat Hillary Clinton.

Guelzo argued that the Electoral College slows down presidential elections by design, providing legitimacy to the presidency and combating voter fraud.

“The Electoral College embodies a fundamental instinct of the Founders, which is to say ‘slow down,’” he said, adding that “gridlock is not actually an accident.”

The history professor pushed back on objections to the Electoral College, including by some analysts who have argued that the current system violates the principle of one person, one vote.

“If one man, one vote is to be the rule, then as soon as a president loses popular support we ought to have another vote,” Guelzo said. “So we could have presidential elections every six months, three months, eight months—every time there’s an unpleasant tweet.”

England based his arguments on the 2000 election, when Republican George W. Bush lost the national vote to Democrat Al Gore and a recount in Florida for that state’s electoral vote threatened to decide who sits in the Oval Office.

“This is not just going on in blue states, this is going on across the country,” England said of the movement to bypass the electoral college. “This is a serious threat wherever you live. Red state, purple state, there are people there lobbying to hijack the Electoral College.”

England said the movement for states to bypass the Electoral College without going through the difficult process of amending the Constitution gained renewed strength after the 2016 election.

Grassroots activists and lobbying organizations, he said, are driving a message that misleads many voters about the facts of the current electoral system.

Von Spakovsky, manager of Heritage’s Election Law Reform Initiative, turned to voting numbers to argue that rural areas would be left behind if the Electoral College were abolished.

“The whole point of the Electoral College is to balance the states’ demands for greater representation and sovereignty against the risk of what James Madison liked to call the tyranny of the majority,” von Spakovsky said.

Looking again at the 2000 election, he warned that without the Electoral College, the chaos that voters and the nation at large experienced during the Florida recount would be extended to every state and county across the nation, as candidates demanded recounts in every region that potentially could sway an election in their favor.

As a result, von Spakovsky said, the decisions of the president would be seen as illegitimate by significant portions of the nation, and voter fraud would run rampant in areas unprepared to deal with it.

“What we’ve had for over 200 years with the Electoral College system is unbelievable stability,” he said.

“There is no reason to change it now.”