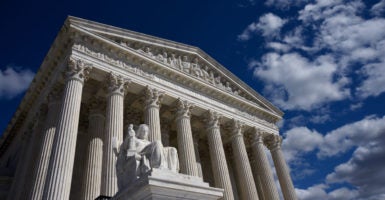 If the Supreme Court rules against the government, it could keep thousands of dangerous aliens who have committed serious crimes, such as aggravated assault and using a weapon to commit a felony, in the U.S. (Photo: Robert Alexander/Getty Images)

The Supreme Court on Nov. 4 heard oral arguments in an immigration case that could have a dramatic impact on how many criminal aliens plaguing our communities finally get deported.

The case, Barton v. Barr, is complicated, in large part because the statutes involved are vague and subject to various interpretations.

That prompted Justice Stephen Breyer to comment during oral arguments that “it wasn’t a genius who drafted this.” But the decision that will be made by the court in interpreting these immigration laws will affect the lives and safety of Americans.

Under federal immigration law, a permanent resident alien who is here legally is “removable” if he is “inadmissible.”  That is to say, he should never have been admitted in the first place because he met one of the factors listed in the statute (8 U.S.C. § 1182(a)), such as posing “a threat to the property, safety, or welfare of the alien or others.”

A permanent resident alien is also removable if he is “deportable” under another statute (8 U.S.C. § 1227(a)), which lists a series of disqualifying offenses, including violations of any “law of the United States.”

The statutory requirement is that the alien has been “lawfully admitted for permanent residence for not less than 5 years”; has “resided” in the country “continuously for 7 years after having been admitted”; and that he has not been “convicted of any aggravated felony.”

What is at issue in the Barton case is the “stop-time rule.”  The stop-time rule outlined in 8 U.S.C. § 1229b(d)(1) says that an alien’s “period of continuous residence” in the U.S. is “deemed to end” if the alien has committed any offense that makes him “inadmissible” or “removable.”

In other words, an alien has to be crime-free under the law during the seven-year period of continuous residence. That’s not asking very much of a would-be citizen or lawful permanent resident.

Andre Martello Barton is a Jamaican who was admitted to the U.S. on a tourist visa in May 1989. In 1992, he was granted permanent resident alien status.  Four years later, in 1996, he was convicted in state court on three counts of aggravated assault, as well as first-degree criminal damage to property and possession of a firearm during the commission of a felony.  This was followed up by more convictions in 2007 and 2008 for drug offenses.

In 2016, the Department of Homeland Security finally sought to remove Barton, and an immigration judge agreed that he could be removed because of his drug and weapon convictions.

When Barton applied for cancellation of his removal, the DHS argued he wasn’t statutorily eligible because he didn’t meet the seven-year continuous residence requirement due to his convictions for aggravated assault in 1996.

The DHS said the “stop-time” rule meant that his period of continuous residence ended in 1996, when he committed the aggravated assaults and firearms offenses.

Barton appealed to the 11th U.S. Circuit Court of Appeals. In what amounts to a highly technical argument about the wording in the applicable immigration statutes, Barton claimed that since he was not currently seeking admission to the U.S., he couldn’t be “rendered” inadmissible through the stop-time rule.

Barton also argues that the 1996 convictions did not trigger the stop-time rule because it is not referenced in Section 1182(a)(2) of the statute, and that he was convicted in July 1996, after the seven-year anniversary of his initial admission as a tourist.

The Court of Appeals rejected Barton’s arguments, and he appealed to the U.S. Supreme Court.

The high court should rule against Barton, too. As the 11th Circuit said, the stop-time rule’s “plain language forecloses” the interpretation that Barton and his lawyers are trying to push.

Further, if the Supreme Court rules against the government, it could keep thousands of dangerous aliens who have committed serious crimes, such as aggravated assault and using a weapon to commit a felony, in the U.S.

Congress obviously wanted criminal aliens like Barton, who endanger our communities, removed from the country. Although the statutes in play here may not have been written by “a genius” (or even a decent legal writer), their intent is clear.

A ruling for Barton would not just violate the text of federal immigration law, but the congressional intent behind those particular statutes.