Why Peace Through Strength Ensures Our Safety at Home 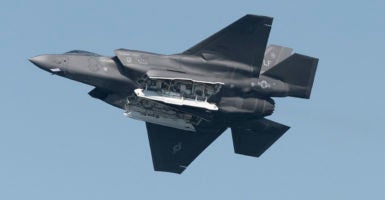 Some Americans have taken for granted that peace is just the natural state of things. Pictured: An Air Force F-35 Lightning stealth fighter made by Lockheed Martin flies over San Francisco Bay on Oct. 13. (Photo: Yichuan Cao/NurPhoto/Getty Images)

The America that we cherish and hope to pass on to the next generation depends on the promise that we have a military strong enough to protect it and everything it stands for.

Without that kind of military might to defend us from our enemies and to deter potential adversaries, everything that America is and was meant to be could be lost—our freedom, our prosperity, and our very way of life.

Unfortunately, our adversaries are spending heavily to increase their capabilities while our armed forces are understaffed and using equipment that’s outdated and on the verge of retirement. China and Russia are both working to overtake the United States as the dominant world power.

We know that their purpose is not to use their militaries for defense, but to put more of the world under their control.

While some may want to argue that we already spend too much on our military, an honest look at the shortages in our ranks and equipment shows the very real need for increased and sustained funding.

What does the assessment show?

The Navy has 290 ships in its battle force, while communist China has a fleet of 300 and growing. The average Air Force fighter aircraft is 28 years old. The Army’s primary tank was introduced in the 1980s.

Our allies are limited in their ability to assist us because they cut their own militaries even more than we did after the Cold War. We’re only capable of fighting on one front, yet we have two large potential adversaries in Russia and China.

As our military has kept foreign invaders from our shores and taken the fight to terrorists on their own soil, some Americans have taken for granted that peace is just the natural state of things. It’s not.

The American people must always understand how much our military protects everything they care about, from their families’ safety to their dreams for the future to almost everything about our way of life.

That’s why it’s critical that they understand what our armed forces require to do their jobs.

A mother in Iowa needs to know if the Air Force can’t get her daughter enough training time in a jet fighter, making her job more risky than it has to be.

Parents in Pennsylvania need to know when their son’s Army unit is called into battle whether it’s equipped with the best available weapons and technology to ensure victory and a safe return home.

And the parents and grandparents of every child in America should understand that if they want these children to grow up in a free nation, they must ensure our military has the ability to stop those who would do them harm.

The good news is that since 2017, Congress and the Trump administration have stabilized military budgets and provided the increased funds needed to make some significant improvements in readiness in every branch.

The bad news is, two years of increased funding isn’t enough to see a change in size and capability large enough to ensure that our military can meet the growing threats around the world.

The problem of underfunding isn’t new, but it’s become more concerning as our adversaries are making huge investments in their militaries and are aggressively working to expand their reach across the globe.

As George Washington said in his first annual address to Congress, “To be prepared for war is the most effectual means of preserving peace.”

This concept of peace through strength is the most effective way to ensure our safety at home. It also ensures a safer and more peaceful world, as it reassures our allies and deters potential adversaries.

Too many Americans take for granted the ability to go to work, play outside with the kids, or just go to bed at night and not live in fear of a missile attack, soldiers marching through our streets, or terrorists attacking a different city each week. People around the world live with those fears that we do not.

With our adversaries growing stronger and bolder each day, we can no longer assume we’ll always be safe. We must be willing to equip those who protect us with what they need to ensure this country remains the strongest and freest on Earth and a beacon of hope for freedom-loving people around the world.