This Impeachment Effort About Ideology, Not Constitution 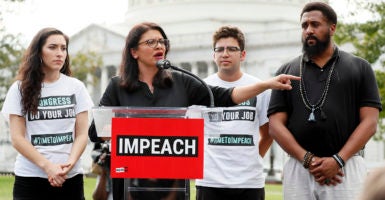 Democrats have not given up looking for an excuse to impeach a president they hate. Pictured: Rep. Rashida Tlaib, D-Mich., speaks at the Sept. 26 “Impeachment Now!” rally on the grounds of the U.S. Capitol. (Photo: Paul Morigi/Getty Images for MoveOn Political Action)

This clash of worldviews helps us to understand that what is going on in our nation is not a legitimate impeachment process but an attempt to wipe out a sitting president for personal and ideological reasons.

Rep. Rashida Tlaib was sworn in as a freshman Democratic congresswoman from Michigan on Jan. 3, 2019.

At a reception following the event, Tlaib, speaking about the president of the United States, said: “We’re gonna impeach the [expletive].”

It had to be unprecedented that a newly elected representative publicly used that kind of language about the nation’s president and expressed an intent to impeach him, with no support from leadership of her own party.

Were there grounds for impeachment? No.

The alleged basis was the Mueller investigation, which subsequently found that allegations that President Donald Trump and his campaign conspired with Russia to interfere with the presidential election were false.

What happened to the sacred principle of innocent until proven guilty?

Tlaib had already convicted Trump. He’s guilty for being Donald Trump and for what he stands for. The law is irrelevant.

Months later, she held a press conference calling Trump a racist and again calling for his impeachment. She noted: “I represent the third-poorest congressional district in this country. … I was elected to fight for them.”

“The current job market is attracting middle- and working-class workers who have been on the sidelines for years,” reported the Journal.

And, black unemployment ticked down a notch to 5.4%, another new historic low.

Haley, who as Republican governor of South Carolina had the Confederate flag removed from the grounds of the state Capitol, said at AEI: “When we retreat into identity and grievance politics, we make the choice for victimhood over citizenship. By constantly blaming others, we reject personal responsibility for ourselves, our families, and our communities.”

Are you listening, Congresswoman Tlaib?

Haley spoke about her parents, who immigrated to the U.S. from India: “We were different. We stood out. And my family felt the pain of being judged by our difference. … But my parents refused to let it define them. They chose citizenship over victimhood.”

Haley quoted Lincoln, who in 1862, when the country was torn apart by civil war, called America “the last best hope of Earth.”

President Trump is a disruptor. That makes … some people very mad. But if we are a country that lives by the rule of law, we must all accept that we have one president at a time and that president attained his office by the choice of the American people.

Haley hailed the American freedom and exceptionalism enshrined in our Declaration of Independence and Constitution, and noted how, at the U.N., representatives from despotic countries would approach her in private and express admiration for our country.

Tlaib is a poster child for her party. Despite the Russia conspiracy charges discredited by the Mueller report, Democrats have not given up looking for an excuse to impeach a president they hate.

Now we have the ridiculous claims from a tainted whistleblower about a conversation Trump had with the president of Ukraine.

It’s not about Russia or Ukraine. It’s about Haley or Tlaib; loving our free country or hating it; citizenship or victimhood; rule of law or guilty until proven innocent.

I meet so many wonderful Americans in my travels around the country.