The Black Regiment That Began an American Tradition 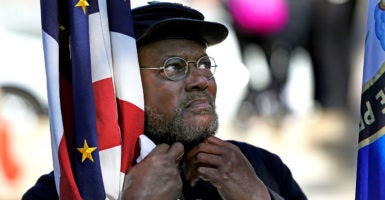 A reenacting member of the 54th Massachusetts Volunteer Regiment fixes his collar during a gathering at the Robert Gould Shaw and Massachusetts 54th Regiment Memorial in Boston on Oct. 15, 2019. (Photo: David L. Ryan/The Boston Globe via Getty Images)

If that war is on history, it seems there’s a lot of folks crying, “Havoc!”

As demands increase for the destruction of monuments honoring our Founders, and content like The New York Times’ 1619 Project emerges, one thing is clear—our history is under attack from those on the left.

I think they would do well to remember a special set of soldiers this Veterans Day: the 54th Massachusetts—one of the first black regiments of the Civil War.

The 1989 film “Glory” solidified their place as American heroes, portraying their formation as a regiment and then their assault on Fort Wagner in July 1863. That battle was one of their first major actions, and it cost them—roughly half their men fell as casualties.

But through the battle, they earned their reputation as fighting men every bit as skilled, if not superior to those on either side of the war.

At the Battle of Olustee, they maintained that reputation.

It was early 1864, and the North and South were slugging it out in battle after battle of attrition. Union strategy: Drain the South of manpower and resources. The Confederate strategy: Hold on for President Abraham Lincoln to lose his reelection bid.

In February, Confederate and Union forces clashed on the sandy, pine flats outside the town of Olustee, Florida.

That’s when the 54th stepped forward, out of reserve, and fought a rearguard action, covering their comrades running to the rear. Pounded and hammered by Confederate fire, the unit held, allowing their comrades time to safely withdraw. Union forces would survive intact, albeit bloodied.

While the 54th’s valor at Olustee was unique, their actions embody the spirit that other minority units have served with in U.S. conflicts.

Here are a few of them.

Black soldiers in the 369th Infantry Regiment won for themselves a fearless and gutsy reputation in the trenches of World War I. Fighting more than any other U.S. unit in the war, the outfit became so renowned for their tenacity that their German foes called them the “Harlem Hellfighters.”

And despite the U.S. government’s decision to place Japanese Americans in internment camps during that same war, thousands of them still chose to serve.

Roughly 6,000 Japanese Americans worked in the Military Intelligence Service during World War II. Others formed the entirety of the 442nd Regimental Combat Team, and the bulk (if not all) of the 1399th Engineer Construction Battalion, 442nd Regimental Combat Team, and the 100th Infantry Battalion—the latter of which was even dubbed the “The Purple Heart Battalion” for the amount of casualties they suffered while fighting in Italy.

The actions of the 54th Massachusetts at Olustee typify this legacy of serving with distinction.

After Olustee, reports circulated that Confederate soldiers killed wounded black soldiers still on the field. An act passed by the Confederate Congress when the 54th was formed had given soldiers permission to do so.

Such was the fate of many black soldiers in the Civil War. At the battles of Dalton and Fort Pillow, Confederates massacred black soldiers attempting to surrender, sparing only a few who they sent back to plantations in the South.

Minorities throughout the U.S. military’s history have also faced severe racism from their own side, including segregation. Their victories often went unpraised, and the cruelty they underwent, unnoticed.

Still, they submitted themselves to the task of building our nation into a better one rather than tearing it down.

Those bent on blocking intersections and defacing monuments seem to have lost sight of this chapter of our history amid their blind, righteous rage for “justice” and recompense for perceived evils.

Men like those in the 54th acknowledged that our country is unique and to be valued, that our founding principles and documents provide citizens opportunities to improve the nation itself as well as their own lives.

Juxtaposed against those who call for shame to be heaped upon our government, our Founders, and our history, these men’s example beckons us to look to a calling that goes beyond ourselves—a calling to serve something higher than our personal interests.

It is a call that Lincoln best articulated in his Gettysburg Address: “ … We here highly resolve that these dead shall not have died in vain; that this nation, under God, shall have a new birth of freedom; and that government of the people, by the people, for the people, shall not perish from the earth.”

On this Veterans Day, with the knell for the war on history ringing, we would do well to remember the men and women throughout our history who have answered Lincoln’s call.

This article has been corrected to reflect that the 54th Massachusetts was one of the first black regiments, and that Navajo code talkers were transmitting messages in code, not cracking code messages.