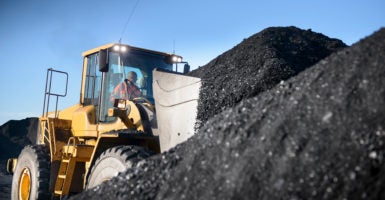 In many states, builders use coal ash in concrete projects because it’s cheap, safe, and durable. (Photo: Monty Rakusen/Getty Images)

With a set of four new rules, the Environmental Protection Agency is improving regulations for the management of coal combustion residuals, better known as “coal ash.”

Coal ash is commonly recycled to make cement, drywall, asphalt, and bricks. It’s processed to make plastics lighter and stronger and as filler in wood products.

Coal ash has been used in major construction projects across the country, including the San Francisco-Oakland Bay Bridge, the New York City and Washington D.C., subway systems, Boston’s “Big Dig” tunnel, and runways at airports such as Dallas/Fort Worth International and Chicago’s O’Hare International.

Even the International Trade Center and the Ronald Reagan Building, which houses part of the EPA’s headquarters, were built with concrete using coal ash.

In many states, including California, builders use coal ash in the majority of their concrete projects for three primary reasons: it’s cheaper, it’s safe, and it’s durable. Environmentally, recycling coal ash reduces the need for new materials and reduces the volume that utilities have to manage for disposal.

The EPA repeatedly concluded that coal ash does not exhibit any characteristics of hazardous wastes and should not be regulated as a hazardous waste under the Resource Conservation and Recovery Act. In fact, the agency chose not to pursue hazardous waste regulations because that would adversely affect the reuse market.

However, in December 2008, a levee broke at Tennessee Valley Authority’s Kingston Fossil Plant and spilled ash into two rivers, subsequently prompting the Obama administration to act.

While coal ash has a valuable reuse market, it also contains toxic metals that, if not properly contained, can threaten water supplies.

In 2015, the Obama administration wisely chose not to classify coal ash as a hazardous waste, but did impose a set of regulations for how utilities should manage it.

Through a set of rules, EPA Administrator Andrew Wheeler is improving the Obama-era requirements and ensuring that coal ash is a usable product into the future while protecting groundwater supplies.

By providing regulatory clarity and flexibility, and by empowering the states, the agency is moving away from a one-size-fits-all program toward a more site-specific, risk-based system.

As Jim Matheson, the CEO of the National Rural Electric Cooperative Association and a former Democratic congressman from Utah, wrote of the proposed changes in June, “This will allow electric co-ops and states to make decisions regarding the continued use and eventual closure of coal ash management facilities based on the actual environmental risk posed by the facility.”

State control over coal ash requirements, as authorized under the 2016 Water Infrastructure Improvements for the Nation Act, will result in more accountable, effective management.

Furthermore, a more flexible, risk-based system should ensure that regulators focus their attention on sites where risks may actually exist, whereas a federal approach imposes prescriptive regulations on an entire industry.

Forthcoming regulations will provide the flexibility for utilities to safeguard against potential threats to human health and the environment while providing a sensible framework to allow for coal ash reuse.

Contrary to claims of the environmental activists, the EPA’s decision is not a gift to the coal industry. It’s not going to allow polluters to go unchecked. The agency’s actions are improving overly stringent and rigid regulations, where utilities would have passed unnecessarily high compliance costs onto ratepayers.

Congress recognized that cooperative federalism is a better approach to protecting the environment by authorizing those closest to the challenge to identify and implement the solutions. The EPA’s rule changes reflect that productive relationship.