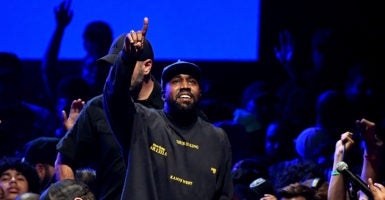 Kanye West performs onstage during his "Jesus Is King" album and film experience at The Forum on Oct. 23, 2019, in Inglewood, California. (Photo: Kevin Winter/Getty Images for ABA)

What happens when one of the kings of pop culture gets born again and starts dropping hard truths on progressive culture?

We’re about to find out.

The internet has been abuzz lately over Kanye West’s latest album, “Jesus Is King,” which was released on Oct. 25. It’s his first album since his public conversion to Christianity. He says he was “radically saved” and delivered from spiritual bondage back in April.

Those who have listened to Kanye over the years expect profanity and sexual innuendo in just about every song. “Jesus Is King” is a radical departure from that.

In fact, the album draws such a sharp break from his past work that the Twitterverse is already speaking of the “Old Kanye” and “New Kanye.” That’s a fitting binary, given the biblical distinction between the old and new man.

Kanye says he won’t perform his old music anymore, at least with the old profane lyrics. He even admitted to asking his team to fast and abstain from premarital sex during their time working on his latest album.

So what’s the big deal about this album? Christian rap has been around for years, and I’d venture to say some Christian rap artists rival the talent of Kanye—though they’ve never enjoyed the same accolades.

This album is unique, though. What makes it such a big deal is who’s rapping, and who’s listening. Kanye is now dropping explosive truth bombs into the culture, and the whole world is listening.

His wife is Kim Kardashian. His home life is broadcast to millions of people through “Keeping Up With the Kardashians,” a top-rated reality TV show.

Kanye rose to the top of the heap for two reasons: his extraordinary musical talent, and his contrarian nature as a man who pushes the boundaries of acceptable thought.

Now, he’s leveraging both of those attributes for the gospel.

Recent interviews show he’s not concerned about losing fans on account of his faith.

“I only fear God,” he said in an interview with BigBoy TV, adding, “I’ve been canceled before they had cancel culture. I’ve done been killed so many times on social media, and I’m still here.”

The Wokeness We Need

Kanye’s newfound faith has made him something of a renegade in the culture war. He’s now doing exactly what we don’t expect from a rap artist: speaking out against abortion, the loss of fathers in the home, and the removal of God from schools.

He’s even called out the depravity of mainstream hip-hop.

In that interview, he waved a red flag: “Wake up culture. Everyone thinks they’re so woke, but they’re following the rules of what woke’s supposed to be.”

Kanye sees political correctness as an emperor with no clothes, a zombie-like form of groupthink that leads people to speak, act, and vote against the truth and for an empty, bankrupt standard of virtue.

What he’s doing is calling BS on the spirit of our age. In place of it, he’s pointing us back to the God who made us, and toward a recovery of the things so central to human flourishing that we’ve neglected in the modern age: family, community life, and actual virtue.

In his album’s most controversial song, “Closed On Sunday,” he treats Chick-Fil-A as an avatar for what we need on a mass level: the drawing of boundaries to protect the most important things. You might even call it a kind of “Benedict option.”

In verse 1, he dethrones culture and confesses his allegiance to Christ:

Follow Jesus, listen and obey/No more livin’ for the culture, we nobody’s slave.

And then the chorus:

Stand up for my home/Even if I take this walk alone/I bow down to the king upon the throne/I know that I am no longer my own.

I draw the line, it’s written in the sand/Try me and you will see that I ain’t playin’/Now, back up off my family, move your hands/I got my weapons in the spirit’s land.

These are the words of a husband and father standing up to the lies of libertine culture, lies he has bought into and even helped propagate for years. He knows the damage they bring and the threat they pose to his kids. So he says “no more.”

And so should we.

This is wokeness in the truest sense—being wide awake to the unique threats that our homes, families, and our very souls face in the modern world.

Kanye has always been ahead of the cultural curve. He’s been at the forefront of culture-making for years. If he’s become disenchanted with the state of our culture, perhaps his millions of followers aren’t far behind.

If so, Kanye may just be the voice our culture needs to lead it out of its present dysfunction. He’s only 42. It will be exciting to watch.