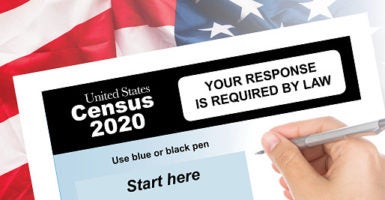 The Census Bureau has set up partnerships across the country to help recruit 500,000 temporary workers for the 2020 census. (Photo: Getty Images)

The Census Bureau is looking to get a more accurate count next year in rural areas and out west, places that often were undercounted in previous censuses.

Specifically, the agency has named Arizona, Alaska, and northern Maine.

The 2020 census will have a significant impact on reapportionment for congressional seats and for state legislative seats. This, in turn, affects how many Electoral College votes each state has.

Census results also determine how much federal highway money and other federal grants a state can have. The Constitution requires the census to be taken every 10 years.

The plan is a “promising” development for getting a more accurate count, said Mike Gonzalez, a senior fellow at The Heritage Foundation.

“The left has politicized the census for years,” Gonzalez said.

Aiming for undercounted areas has the potential for a less-politicized outcome, Gonzalez said, although he is skeptical of how much more accurate the outreach will make the 2020 count.

To better count the areas, the Census Bureau has set up partnerships across the country to help recruit 500,000 temporary workers for the 2020 census.

Pay rates for census takers going door to door or contacting people by phone or email vary, depending on where the job is located, from $13.50 to $30 per hour, according to the Census Bureau.

“Arizona has seen major growth over the last 10 years and we’re on track for more,” Debbie Johnson, executive director of the Arizona Office of Tourism and chairman of Arizona’s Complete Count Committee, which is partnering with the Census Bureau, said in a formal statement.

“We’re proud to collaborate with our federal and local partners for a complete count in the 2020 census to ensure that we preserve the outstanding quality of life in our state through equitable distribution of funds and services for Arizonans,” Johnson said.

The Census Bureau, with locally based partners, plans about 4,000 local recruiting events.

“We need people to apply now so they can be considered for part-time census taker positions next spring,” Timothy Olson, the bureau’s associate director for field operations, said in a statement. “Recent high school graduates, veterans, retirees, military spouses, seasonal workers, and applicants who are bilingual are highly encouraged to apply. It’s important we hire people in every community in order to have a complete and accurate census.”

The country needs to have as accurate a census as possible, said Hans von Spakovsky, a senior legal fellow at The Heritage Foundation.

“Getting accurate counts in dense urban areas is relatively easy compared to rural and particularly large western states where the population can be extremely dispersed in remote areas,” von Spakvosky said. “It is fortunate that the Trump administration recognizes this problem and is working to increase the effectiveness of the census count in those parts of the country.”

The 2020 census officially starts counting people in January in remote Toksook Bay, Alaska, according to the Census Bureau.

The bulk of the nation’s households will get their census forms in March.

Selection for the census taker positions will begin in January. Paid training is set for March and April, and the enumeration of nonresponding households throughout the nation will occur from May through early July.

“AARP knows that historically 50% of census takers are over the age of 50 and many are retirees,” Dana Marie Kennedy, state director of AARP Arizona, said in a prepared statement. “These folks tend to be reliable, dependable, and they know their communities best. They bring with them years of experience and get the job done.”