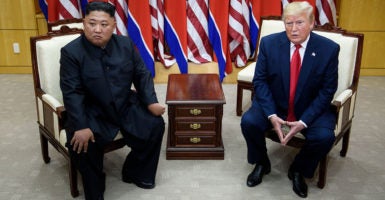 North Korea and the United States gave strikingly different interpretations of the collapse of working-level denuclearization talks in Stockholm.

Pyongyang characteristically took a maximalist approach, both in its rhetoric and its demands. Having commanded the United States to adopt a totally “new method of calculation,” the regime disparaged Washington’s new proposals.

North Korean negotiator Kim Myong-gil declared that denuclearization is possible only after the cessation of all U.S.–South Korean joint military exercises, while Kim Song, North Korea’s ambassador to the United Nations, demanded an end to all sanctions.

The Trump administration provided a more optimistic spin on the meeting, rebuffing North Korea’s assertion that it had not provided a new proposal. The State Department commented that the United States “brought creative ideas [and] a number of new initiatives.”

Pyongyang dismissed U.S. eagerness to resume talks quickly, declaring it had “no intention to hold such ‘sickening negotiations’” before the United States takes substantial steps to end its “hostile policy.”

The diplomatic talks augering into the ground so dramatically does not augur well for future progress.

Nuclear negotiator Kim cautioned that without significant U.S. policy changes the bilateral engagement “may immediately come to an end for good.” He ominously warned that the regime was reconsidering its moratorium on nuclear and intercontinental ballistic missile tests.

In April, North Korean leader Kim Jong Un declared his patience will last only until the end of the year when the situation becomes “gloomy and very dangerous.”

Some dismiss North Korea’s acerbic comments as diplomatic maneuvering and indeed, the regime often engages in brinkmanship to wrest additional concessions from opponents. But underlying the tactical maneuvering are enduring North Korean strategic objectives to maintain its nuclear arsenal.

President Donald Trump declared that “the best thing that’s happened to this country” during his administration was his “very good relationship with Kim Jong Un.”

But this relationship has not produced any progress on denuclearization. The two sides have yet to even agree on a definition of “denuclearization” or the “Korean Peninsula.” North Korea continues to expand and refine its nuclear and missile arsenal.

Some argue, incorrectly, that there has been no cost to Trump’s approach. However, that neglects the large U.S. sanctions relief, cancellation of numerous military exercises, and embrace of a purveyor of crimes against humanity, which undercut all components of the maximum pressure policy.

The United States also accepted 21 North Korean violations of U.N. resolutions this year without any response or repercussions to the regime. Trump has now adopted a weaker version of the Obama administration’s strategic patience policy and timid incrementalism of sanctions enforcement.

Despite the setback in the February 2019 Hanoi summit, Kim Jong Un may feel he has the upper hand in negotiations. Pyongyang publicly referenced the 2020 presidential election and may hold threats of resuming nuclear and ICBM tests as a Damocles sword over Trump’s head to induce additional concessions.

The regime may perceive the dismissal of national security adviser John Bolton as portending a softening of U.S. policy. Bolton’s departure removed the biggest constraint to an incomplete deal that prematurely reduces pressure prior to real denuclearization.

Though there is little reason for optimism, the United States should continue diplomatic attempts to reduce the North Korean nuclear threat. But the Trump administration should not become overeager to accept a weak, flawed agreement.

The United States should reciprocate North Korea’s end-of-year deadline with one of its own. Washington should announce it will resume canceled military exercises with South Korea and no longer pull its punches on enforcing U.S. laws if Pyongyang continues to drag its feet on complying with U.N. denuclearization requirements.

America’s self-imposed concessions did not lead to diplomatic progress nor reduce the North Korean military threat.

North Korea is likely to remain a threat that requires a bipartisan policy of deterrence, containment, and compellence. The best policy for the United States is a comprehensive strategy of diplomacy, upholding U.N. resolutions and U.S. laws, and deterrence until the nuclear missile and conventional force threat is reduced.

First published in The Washington Times.