Ben Carson Rejects Political Correctness as Fatal to the Nation 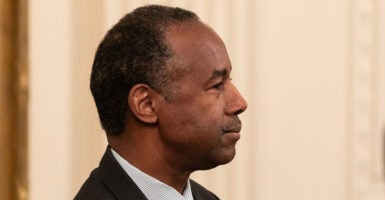 "We've got to nip it in the bud before it gets to the place where everybody just is silent," HUD Secretary Ben Carson says of political correctness. Pictured: Carson attends the Presidential Medal of Freedom ceremony on Nov. 16, 2018. (Photo: Cheriss May/NurPhoto/Getty Images)

“This whole concept of political correctness … it’s going to destroy our nation.” That was the no-nonsense response of Housing and Urban Development Secretary Ben Carson last week to Rep. Jennifer Wexton, D-Va.

Wexton was trying for a “gotcha” moment in a congressional hearing when she asked Carson if he would “apologize” for being quoted for expressing concern over “big, hairy men” trying to gain entry to an Alaska women’s homeless shelter.

I could not have said it better. On the most recent edition of “Washington Watch,” Carson—or Dr. Politically Incorrect, as I’ve called him—joined me to make it clear he will not kowtow to political correctness.

“It’s foolishness because, you know, the First Amendment guarantees people freedom of speech,” he said. “What political correctness does is it makes people afraid to express themselves. So coming in the back door, it actually suppresses the First Amendment. And we need to be very, very wary of anything that takes away our constitutional rights.”

Carson went on to nail the consequences of caving into the left’s tantrums:

Anything that doesn’t agree with them is a hateful word, and that’s what I mean when I said we need to be more mature than that. That’s what I might expect from a third-grade playground. If we make everything such a sensitive subject and everybody has to sit down and filter everything that they say, and we’re listening carefully to their words instead of what their meaning is, what do we become as a society and as a people?

We’ve got to nip it in the bud before it gets to the place where everybody just is silent. And they can’t say anything because it’s going to offend somebody.

Carson is speaking up for what is a commonsense policy: Sexually assaulted and abused women seeking shelter should not be forced to sleep next to men who think or act like they are women when they are biological men.

But he is also speaking up for free speech and freedom of religion. The left portrays the Trump administration as lacking compassion for people who need housing, but the opposite is true.

It is the Department of House and Urban Development under Carson’s leadership that has expanded access to people who need housing because the agency is once again allowing faith-based organizations to partner with the government after they were excluded during the Obama years. This inclusion of faith-based organization helps meet the needs in local communities all across America.

The Obama administration required faith-based groups to leave their faith at the door and pushed bizarre policies that put men in women’s homeless shelters. Thankfully, we have a HUD secretary who understands the principle that has guided America for centuries—equal rights for all, special rights for none.