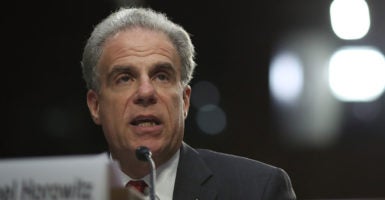 “The goal from my standpoint is to make as much of our report public as possible,” Justice Department Inspector General Michael Horowitz says of a report that will detail an investigation into whether the FBI complied with laws and policies in applications for FISA warrants against Trump campaign adviser Carter Page. Pictured: Horowitz testifies before the Senate Judiciary Committee on Capitol Hill June 18, 2018, in Washington, D.C. (Photo: Win McNamee/Getty Images)

The Justice Department inspector general’s report on possible FBI abuse of the foreign surveillance process is “lengthy,” and is likely to be made public with “few” redactions, the inspector general told lawmakers Thursday, according to a letter obtained by The Daily Caller News Foundation.

Michael Horowitz, the inspector general, informed Republicans and Democrats on four congressional committees with a status update on the report, which will detail an investigation into whether the FBI complied with laws and policies in applications for Foreign Intelligence Surveillance Act (FISA) warrants against Trump campaign adviser Carter Page.

Republicans have anticipated the report for months, with many speculating that it will show that the FBI misled the FISA court by relying heavily on the unverified Steele dossier to spy on Page.

Horowitz’s description of the report is likely to please Republicans, in that it suggested most of the information that the watchdog uncovered will be made public.

“Given that our draft report is lengthy, and concerns sensitive national security and law enforcement matters, we understood that it would take the Department and the FBI some time to work through and appropriately mark the entire report,” Horowitz said in the letter.

Horowitz, an Obama appointee, said the process is “nearing completion,” and that his office is working “constructively” with the Justice Department and FBI.

“The goal from my standpoint is to make as much of our report public as possible,” said Horowitz, adding that he anticipates the final report “will be released publicly with few redactions.”

Horowitz said after he receives final classification recommendations from the DOJ and the FBI, his office will begin the normal process of reviewing the report for accuracy, and provide the agencies a chance to respond to allegations of wrongdoing.

The FBI obtained four FISA warrants against Page, with the first granted Oct. 21, 2016.

In the applications, the FBI cited information from Christopher Steele, a former British spy collecting dirt on the Trump campaign on behalf of the Democratic National Committee and Clinton campaign.

Steele said the Trump campaign was part of a “well-developed conspiracy of cooperation” with the Kremlin in 2016. He also said Page was part of the conspiracy.

But the special counsel’s report undercut both allegations. Prosecutors said in their report that there was no evidence of a Trump-Russia conspiracy, and no evidence that Trump associates were found to be Russian assets.

Horowitz began his investigation March 28, 2018. He told lawmakers in a status update June 25 that his team had reviewed more than 1 million documents and interviewed more than 100 individuals as part of the probe. On Sept. 13, he submitted a draft of the report to the FBI and Justice Department for review.

Republicans had grown impatient in recent weeks about delays in the release of the report.

Iowa Sen. Chuck Grassley tweeted Monday that he believed the so-called deep state had put a “deep six” on the report.