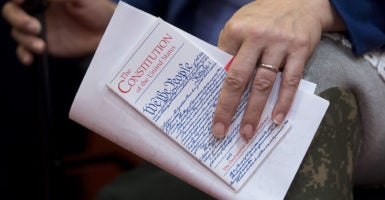 The Supreme Court will hear a case challenging the constitutionality of the Consumer Financial Protection Bureau. (Photo: Saul/Loeb/AFP/Getty Images)

The Supreme Court agreed Oct. 18 to hear a case challenging the constitutionality of the Consumer Financial Protection Bureau.

The court will decide whether, by sharply curtailing the president’s ability to remove the head of this executive branch agency, Congress violated the Constitution’s separation of powers.

It is unique among executive agencies in that it has a single director whom the president cannot remove except “for cause”—that is, “inefficiency, neglect of duty, or malfeasance in office.”

Seila Law, a California-based law firm that helps people get rid of consumer debt, sued, arguing that that structure violates the separation of powers because Congress gave the director a great deal of executive power without making him accountable to the president.

The appeal comes out of the U.S. Court of Appeals for the 9th Circuit, which upheld the consumer bureau’s structure, although it said Seila Law’s argument was “not without force.” The court nevertheless rejected Seila Law’s argument because “the for-cause removal restriction protecting the CFPB’s Director does not impede the President’s ability to perform his constitutional duty to ensure that the laws are faithfully executed.”

The U.S. Court of Appeals for the District of Columbia Circuit upheld the structure of the bureau last year, when now-Supreme Court Justice Brett Kavanaugh was still a judge on that court.

In a forceful dissent, Kavanaugh wrote that “other than the President, the Director of the CFPB is the single most powerful official in the entire U.S. government, at least when measured in terms of unilateral power.” Kavanaugh explained that unlike other agency heads, the Consumer Financial Protection Bureau’s Director is “unaccountable to the president” and this “novel structure” violates the Constitution.

Although the consumer bureau defended its structure in the lower courts, it has reversed its position in the Supreme Court, arguing now that its structure is unconstitutional. The agency asserts, however, that the court can solve the problem by simply striking down the “for-cause” removal limitation, but otherwise preserving the agency.

It may not get its way. The court is at least considering whether to invalidate the entire agency.

In its order accepting the case, the court asked the parties to answer this question: If the for-cause removal requirement is unconstitutional, can it be severed from the rest of the statute that created the bureau? If it can’t be severed, then the court might invalidate the entire agency.

Notably, in his D.C. Circuit dissent, Kavanaugh wrote that he believed the for-cause requirement could be struck down while preserving the rest of the agency. Whether he retains that opinion and whether his eight colleagues agree remain to be seen.

The case is important because it presents an opportunity for the court to defend the separation of powers. The court notably missed another opportunity to do so last term in Gundy v. United States, when it upheld a broad delegation of law-writing authority from Congress to the attorney general.

It should not miss another opportunity, particularly where, as in this case, even the agency itself concedes that its structure violates the Constitution.

The case also affords the court the opportunity to correct the damage caused by the bureau’s unconstitutional structure.

As The Heritage Foundation has discussed at length here, and then-law professor Neomi Rao, now a federal judge herself, testified here, the unconstitutional structure of the bureau has led to abuses of its power that have caused economic harm and undermined the rule of law.

At the very least, therefore, the court should invalidate the Consumer Financial Protection Bureau’s decisions of the past nine years because they’re products of an unconstitutional agency.

In the meantime, however, the court should not miss this opportunity to tell Congress that when the Constitution says the legislative, executive, and judicial powers shall be separate, it really means it.