Ex-ICE Chief on Congress and Border Security: ‘They’ve Done Nothing’ 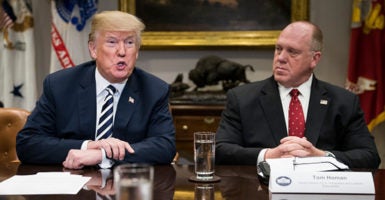 “It’s a shame in this day in America when the government of Mexico has done more to secure our border than the Democratic leadership of the Congress,” Thomas Homan tells a Heritage Foundation audience Tuesday. Pictured: President Donald Trump with Homan, then acting director of U.S. Immigration and Customs Enforcement, during a law enforcement roundtable on sanctuary cities March 20, 2018, in Washington. (Photo: Jabin Botsford/The Washington Post/ Getty Images)

If Mexico stops helping the United States halt illegal immigration, it could mean trouble on the heels of inaction by Congress, a former top U.S. immigration official warns.

“It’s a shame in this day in America when the government of Mexico has done more to secure our border than the Democratic leadership of the Congress,” Thomas Homan, former director of U.S. Immigration and Customs Enforcement, said Tuesday at The Heritage Foundation’s annual President’s Club meeting in Washington.

“That is just a stone cold fact,” Homan said during a panel discussion on immigration reforms. “They have done nothing.”

“If Mexico stops, if Mexico changes leadership and Mexico decides, ‘You know what, we’re not going to spend this type of money anymore,’ we’re in trouble,” Homan said. “Congress has done nothing but have hearings trying to impeach this president.”

The former ICE chief noted a 64% decline in illegal border crossings since their height in May, and said:

Because of the president’s work, the number [of illegal entries] is down 64%. Name one thing Congress has done to address the border issue.

The moderator for the panel was Robert Bluey, executive editor of The Daily Signal, the multimedia news organization of The Heritage Foundation.

A clip of a confrontation between Homan and Rep. Alexandria Ocasio-Cortez, D-N.Y., during his congressional testimony prompted applause from the Heritage audience.

Before leaving the panel early for his White House meeting, Homan said: “I’m going to meet with the greatest president of my generation in about a half-hour.”

Morgan talked about the progress made on building more border wall and said he is confident that officials will construct 450 additional miles of wall. That includes replacing parts of existing fence that could be pushed down, he said.

Federal judges have sought to thwart Trump’s agenda more than they did any other president, Cuccinelli said.

“This president suffered more from activist judges than all presidents combined,” he said. “That’s statistically impossible as a random occurrence. That means we are at a critical mass of judges [who] cast aside their object to call balls and strikes … and they are legislating from the bench.”

Cuccinelli, a former Virginia attorney general, referred to “little judges being little presidents in their courtroom.”

If some judges want to make law, they should run for office, he said. Otherwise, he said, they are violating the Constitution’s separation of powers.