We Need More Rapists in Prison, Not Fewer. Why AOC Is Wrong Again. 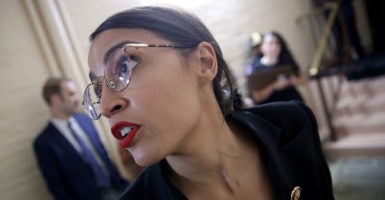 Rep. Alexandria Ocasio-Cortez, D.-N.Y., should use her influence to push for sensible ideas, not extreme notions of abolishing all prisons and jails. Pictured: Ocasio-Cortez answers questions from reporters Sept. 24 while entering a House Democrat caucus meeting at the Capitol. (Photo: Win McNamee/Getty Images)

Seriously. The freshman congresswoman wants Congress to pass a law abolishing all prisons. Setting aside the fact that Congress has no authority to require states to abolish prisons, let’s take a look at her idea.

Based on Justice Department numbers, abolishing prisons would set free 182,000 murderers, 164,000 rapists and sex offenders, 168,000 robbers, and other violent felons in state prison.

Ocasio-Cortez might better lead her party to put more rapists in jail by providing federal funds to help states eliminate the backlog of DNA rape kits that need testing. For the first time in more than a decade, the House of Representatives has failed to provide those vital funds, which have been used to identify and convict rapists.

The law providing this assistance is called the Debbie Smith Act. In March 1989, Debbie Smith was robbed, assaulted, and brutally raped over the course of an hour in a wooded area outside her home in Williamsburg, Virginia. After the assailant fled, Smith rushed back to her home and woke her police officer husband, who urged her to go to the hospital for a sexual assault examination.

Fortunately, the DNA evidence collected from Smith resulted in a hit when entered into the national DNA database called the Combined DNA Index System a year later, in 1995.

That hit identified her rapist, Norman Jimmerson, who, at the time of his identification, was already serving a 161-year sentence for the abduction and robbery of two other women in 1989. One of his victims, Ursula Kolek, was abducted and robbed more than six months after Smith’s rape.

Who knows how many of Jimmerson’s victims are out there?

Sadly, Smith’s long wait to have her rape kit tested is not unusual. Many sexual assault victims wait months or even years before their kits are tested—if they are ever tested at all.

North Carolina, California, Florida, and Georgia are among states with backlogs of 10,000 kits or more, and experts say as many as 200,000 untested kits are sitting on shelves in crime labs and police departments.

This past May, the Senate once again unanimously voted in favor of reauthorizing the law. To date, House Speaker Nancy Pelosi, D-Calif., has refused to reauthorize the funds, despite efforts by Rep. Ann Wagner, R-Mo., who says Pelosi is “playing politics” with the issue of rape.

Evidence shows this grant money makes a significant difference. Since the law was implemented in 2005, the Debbie Smith Act has funded the completion of more than 860,000 DNA cases, resulting in more than 376,000 DNA profiles being uploaded to the central data base.

These DNA profiles have resulted in more than 192,000 matches between rape kits for unresolved crimes and DNA profiles of previously documented criminals. Appropriations under the law account for 40% of forensic profiles and an astounding 45% of all DNA matches.

In addition to the staggering and lasting emotional toll on the victims of the rape itself, failing to test rape kits and solve these cases also carries a financial cost to the states.

A January 2018 report on rape kit testing in Kentucky found that nearly 1,000 previously untested rape kits resulted in 340 viable DNA profiles. Of those 340 profiles entered into the central data base, 144 came back as hits, representing an astounding 42% hit rate.

Of these 144 hits, 57 offenders (39.5%) were convicted of crimes that took place after the crime from which the rape kit was procured. The crimes represented among these offenders include two murders, 12 sexual assaults, 34 assaults, and five robberies.

The report found numerous individuals with DNA profiles in the national data base that occurred as long as 13 years prior to the offense in which the rape kit went untested. Tangible and intangible costs associated with those 57 offenders exceed $22 million.

Ocasio-Cortez should use her current influence to push for sensible ideas, not extreme notions of abolishing all prisons and jails. Rather than freeing 164,000 convicted rapists, she should push for funding that will ensure more rapists face justice.

Victims of rape and sexual assault deserve no less.