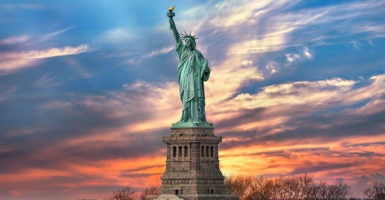 The Heritage Foundation will introduce a set of 14 conservative principles Monday at the outset of the influential think tank’s annual President’s Club meeting in Washington.

Heritage Foundation President Kay Coles James said the laser-focused definition of conservatism in the document, called “True North: The Principles of Conservatism,” is designed to unite the movement.

“While good conservatives may have differing viewpoints about some aspects of conservatism, there are certain fundamental principles where we must remain resolute. These are our True North principles,” James said in an email to Heritage staff announcing the set of conservative principles.

“They’re called True North because they represent a fixed direction on which to stay focused, regardless of which way forces may be pressuring us,” she said.

James, who became Heritage president in January 2018, is a former director of the U.S. Office of Personnel Management and former secretary of health and human resources for Virginia as well as a trustee at the think tank since 2005.

The President’s Club meeting, held each fall, brings together the leading think tank’s supporters to network with and hear from leaders in the conservative movement, including lawmakers, policy experts, and commentators.

The 14 principles laid out in “True North” cover much ground, beginning with the importance of the federal government’s role in society, namely that it “exists to preserve life, liberty, and property, and it is instituted to protect the rights of individuals according to natural law.”

These rights, some laid out in the Declaration of Independence and others specified in amendments to the Constitution, include life, liberty, and the pursuit of happiness; freedom of speech, religion, assembly, and the press; and the rights to bear arms, to be treated equally and justly under the law, and to enjoy the fruits of one’s labor.

The second point of “True North” establishes that government only has the power given to it within the confines of the Constitution, quoting Thomas Jefferson as saying: “The government closest to the people serves the people best.”

The document recognizes that individuals and families as the primary and most important decision-makers when it comes to their lives and those of their children, including employment, education, and health care.

It defines the family as the “essential foundation of civil society” and calls marriage between one man and one woman the “cornerstone of the family.”

Here is the full list of “True North” principles for conservatism:

1. The federal government exists to preserve life, liberty, and property, and it is instituted to protect the rights of individuals according to natural law. Among these rights are the sanctity of life; the freedom of speech, religion, the press, and assembly; the right to bear arms; the right to be treated equally and justly under the law; and the right to enjoy the fruits of one’s labor.

3. Judges should interpret and apply our laws and the Constitution based on their original meaning, not upon judges’ personal and political predispositions.

4. Individuals and families—not government—make the best decisions regarding their and their children’s health, education, jobs, and welfare.

5. The family is the essential foundation of civil society, and traditional marriage serves as the cornerstone of the family.

6. The federal deficit and debt must not place unreasonable financial burdens on future generations.

7. Tax policies should raise only the minimum revenue necessary to fund constitutionally appropriate functions of government.

8. America’s economy and the prosperity of individual citizens are best served by a system of free enterprise, with special emphasis on economic freedom, private property rights, and the rule of law. This system is best sustained by policies promoting free trade and deregulation, and opposing government interventions in the economy that distort markets and impair innovation.

9. Regulations must not breach constitutional principles of limited government and the separation of powers.

10. America must be a welcoming nation—one that promotes patriotic assimilation and is governed by laws that are fair, humane, and enforced to protect its citizens.

12. International agreements and international organizations should not infringe on Americans’ constitutional rights, nor should they diminish American sovereignty.

13. America is strongest when our policies protect our national interests, preserve our alliances of free peoples, vigorously counter threats to our security, and advance prosperity through economic freedom at home and abroad.

14. The best way to ensure peace is through a strong national defense.