This E-Cigarette Tax Could Be Hazardous to Your Health 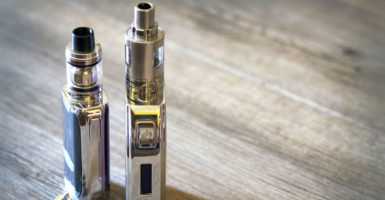 A new proposal in the House Ways and Means Committee to tax electronic cigarettes could harm the health of Americans—and could even be deadly. (Photo: Marco Rossetti/ EyeEm/Getty Images)

Sin taxes of all types have unintended consequences.

A new proposal in the House Ways and Means Committee to tax electronic cigarettes could harm the health of Americans—and could even be deadly.

The tax will slow the decline in traditional smoking-related health complications as fewer adults switch to smokeless alternatives that research has demonstrated to be less harmful.

The tax will also stimulate the black market and move the sale of otherwise legal products outside the reach of law enforcement and health officials.

The health risks of traditional tobacco cigarettes are well-known. Cigarette use “is the leading preventable cause of death in the United States,” according to the Centers for Disease Control and Prevention.

New products such as e-cigarettes are able to deliver nicotine without the chemicals and tar that are most destructive to the human body. Nicotine alone does not cause cancer.

E-cigarettes don’t have to be 100% risk-free to be a major improvement over inhaling from the end of what I grew up knowing as “death sticks.”

In a comprehensive report, Public Health England concluded that e-cigarettes are “95% less harmful than tobacco cigarettes” and “have the potential to help smokers quit.”

If Congress is worried about public health, it should be broadcasting the potential benefits of vaping, rather than taxing and vilifying the healthier alternative.

The tax would be in addition to the Food and Drug Administration’s regulatory obstacles, which pose a threat to the continued existence of many vaping businesses.

The sensationalized stories of vaping-related lung injuries and deaths appear to be linked to non-name brand, black market products, many containing THC, the main psychoactive constituent of marijuana.

By levying new taxes that would push more people into the black market, Congress would increase the likelihood of Americans buying unsafe products.

The evidence from traditional cigarette taxes is instructive. In New York, where the tax rate is the highest in the nation, more than half the cigarette consumption is illegal, making otherwise law-abiding citizens into tax-evading criminals.

High sin taxes create black markets, which in turn breed crime and unnecessary conflict. For example, a Virginia man hired a contract killer over a cigarette-smuggling dispute, and the altercation that lead to the death of Eric Garner began over untaxed cigarette sales.

Selective excise taxes almost always have unintended consequences. Soda taxes induce many consumers to switch to beer or replace soda with other high-calorie options. Smokers in high-tax states have been found to smoke cigarettes that are longer and higher in tar and nicotine than smokers in low-tax states.

Selective taxes imposed on politically disfavored goods tend to disproportionately hurt the poor. Lower-income consumers spend a larger share of their incomes on things such as cigarettes and sugary drinks. They are also more likely to try to evade the tax, increasing their exposure to the health and legal risks of the black market.

Most fundamentally, sin taxes, especially federal sin taxes, are antithetical to American freedoms. Not only is the government attempting to manipulate your ability to buy otherwise legal goods, it is raising revenue to further expand the already intrusive federal bureaucracy.

For better or worse, state governments are already increasing taxes on e-cigarettes. A new federal tax will impinge on local authorities’ ability to make the best decisions for their residents.

Instead of attempting to manipulate consumer behavior, Congress should work to levy taxes in the most economically efficient and least market-distorting manner to fund a limited constitutional government.

All forms of sin taxes are bad public policy. They create unintended consequences, rarely address the intended problem, and grow the size of government. A new federal tax on e-cigarettes would be no exception.