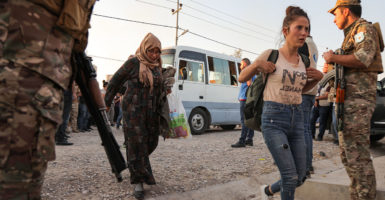 A woman and a girl walk after disembarking from a minibus transporting Syrians who have been recently-turned refugees by the Turkish military operation in northeastern Syria (Photo: Safin Hamed/ Getty Images)

The United States did not green-light the Turkish incursion into Syria. The U.S. did, however, fail to deter the incursion, and it failed to broker any kind of deal between Turkey and the YPG, the armed Kurdish militia fighting the Islamic State in northern Syria.

All of that is now history, and—as we know—there are no do-overs in history. All the U.S. can do today is focus on continuing to protect its interests in the region for tomorrow.

America has always had limited capabilities, interests, and influence in Syria, and Syria’s fate has never been a vital U.S. interest.

Syrian leader Bashar Assad, the country’s weak strongman, has always been in the orbit of Iran and Russia. If it weren’t for the outbreak of the civil war there—resulting in horrific atrocities by his regime, a flood of refugees and the rise of an ISIS “caliphate” bent on transnational terrorism—the U.S. couldn’t care less.

The Turkish incursion has forced the U.S. to reduce its footprint in Syria or risk putting our small contingent there at risk of being caught in a shooting war between the YPG and Turkish forces. Indeed, over the weekend there were reports that Turkish indirect fire came dangerously close to a U.S. forward position.

We also saw a rash of dire predictions that the Turkish incursion and the U.S. pullback would reverse all that we’ve achieved in Syria and put us back to President Barack Obama’s “square one” or worse.

But there’s no doubt that what’s happening there now is bad. For the civilians caught in the middle, it’s tragic. Fighters on both sides are dying over territory they should be negotiating over. And the prospects of reaching an end to Syria’s civil war have been pushed farther into the distance.

But core U.S. interests have not necessarily been put in jeopardy—and they won’t be as long the problems in Syria can be kept in Syria. The Turkish intervention won’t undermine U.S. efforts to pressure Iran into more civilized behavior. And it won’t jeopardize U.S. relationships with other allies.

While both ISIS and Assad may try to take advantage of the chaos, it’s unlikely that the repositioning of the small contingent of U.S. troops will tip the balance in either one’s favor.

Yet the Turks’ distinctly undesirable action has created a public relations disaster for the Trump administration. As it tries to get on top of that, it must also continue to protect America’s limited interests in Syria.

For starters, Washington—and the rest of the free world—must hold Turkey accountable for its actions. Germany and other European allies have rightly condemned Ankara’s aggression.

We also must continue trying to broker a cease-fire. In the long term, fighting isn’t in the interest of either side; it certainly doesn’t make our efforts any easier, and it’s just more misery for the people of Syria.

The U.S. will also need to bolster its presence and influence in the region. The recent deployment of U.S. forces to Saudi Arabia to help defend the kingdom against a repeat of Iranian aggression is a good step. U.S. troops will also need to continue to exert influence in Iraq, where protests and violence threaten the country’s tenuous stability.

At home, the administration will have to ride out the massive wave of criticism.

The U.S. isn’t fighting endless wars, nor does it have any desire to do so. We aren’t going to end intractable conflicts in the region like Syria, Yemen, and Libya—nor is that our job.