This Student Refused to Bow to Trans Ideology at Berkeley 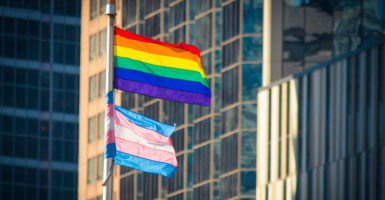 Isabella Chow recently served as a student senator at the University of California, Berkeley, one of the most far-left campuses in America. She received major backlash from fellow students when she abstained from voting on a measure to support transgender ideology. Today, we’ll share an exclusive interview with Isabella by our colleague Virginia Allen. We’ll also share an interview with a state senator from a deep blue state who’s a leading pro-life advocate.

Virginia Allen: I am joined by Isabella Chow, a recent graduate of UC Berkeley. She served as a student senator on her campus, but faced severe backlash when she abstained from voting on a bill that would put the body on record as supporting transgender ideology.

Isabella, thanks so much for joining me.

Isabella Chow: Thank you for having me.

Allen: Well, first off, congratulations on your recent graduation. That’s a huge accomplishment. Let’s get right into it though. Let’s go back to the beginning of when this controversy first started. As a student senator, you abstained from a vote that was in support of affirming transgender ideology. Why did you choose to abstain?

Chow: It’s interesting because there were parts of the bill that I agreed with. For example, I don’t think violence against transgender people is ever, ever OK. At the same time, most of the bill was asking me to affirm gender fluidity.

As a senator elected specifically by the Christian community at Berkeley, and as someone who is openly Christian on the student senate, I said, “I believe that God created male and female at the beginning of time. I don’t really feel comfortable supporting your resolution in its entirety.”

Allen: Now, you received quite a lot of backlash from the stance that you took. What was it like to have people being very open about opposing you and opposing your beliefs, and even having hundreds of people protest you for your stance?

Chow: I guess in the moment it was really overwhelming. It was just hard, I guess. In hindsight, it was very difficult to just have to put my emotions aside and still do homework, still go to midterms [and] at the same time, respond to emails, and figure out how to tell my story to the media, get enough sleep. It was overwhelming in the moment.

I think as a Christian at Berkeley what I’m most thankful for was the fact that I had to learn to understand the majority on campus, which was very opposed to many of my Christian views. Because I made sure that my friends and I, my advisers, the people who supported me, sought to understand even before we were understood, I think that sent a much stronger message than we would have if we had just said the first words that came to our heads.

Allen: How did you go about that, about trying to work to see the side that they were coming from?

Chow: Again, when everything happened I didn’t feel like I had the answers, but I told myself that I would listen. That meant sitting through that three-hourlong protest where people were honest, just calling me the F word over and over.

Looking back, that is absurd, that is outrageous, but at the same time, I wonder what would have happened if I hadn’t sat there and listened to them. Because then I would have totally just perpetuated the stereotypes that Christians are hateful and bigots, and we don’t care about them. Sometimes I wonder if Jesus were in that position, would he have listened, too? I think the answer is “yes.”

Allen: In the midst of that name-calling and that controversy, what sustained you to keep going?

What a lot of people don’t know is that the night of the protest, a week after the vote, actually less than 24 hours before there were several leaders from different college ministries that called for a prayer meeting. They just jam-packed this room that one of the ministries owned, or rented, I guess.

It was just so beautiful because these students don’t normally interact with each other.

If you go to Cru, you stay with Cru. If you go to InterVarsity, you stay with your InterVarsity events and fellowship. But to know that people were coming together to pray not just for me as their representative, but for the LGBTQ+ students who genuinely felt hurt, genuinely felt misunderstood, and yet didn’t know that Jesus loved them, didn’t understand that I truly was not contradicting myself when I said, “I love you, and yet I don’t fully agree with what you’re trying to get me to vote on.”

Allen: Wow, that’s so powerful to feel that support from the community around you. That’s amazing. What was the most important lesson that you would say that you’ve learned through this experience?

I’m also very, very thankful that the Christian community at Berkeley is actually quite significant. I actually attribute that to, you may call it, persecution on campus just because at Berkeley there’s no middle ground. If you’re Christian, you’re a Christian. If you’re not Christian or you don’t want to go to church, [you] don’t call yourself a Christian.

I’m very, very thankful for the community at Berkeley that really strengthened me. I guess just in terms of, again, hindsight is 20/20, what I’ve learned, I was obviously forced to understand the complexities of the LGBTQ+ debate a lot more.

If there’s anything that I would’ve done again, I would have sought to continue building bridges even before this happened. I wish that I had more capacity just as a person to reach out to people in the LGBTQ+ community just to be proactive about building friendships. Even if they still turned their backs on me, I think I would’ve tried to reach out before controversy erupted.

Allen: What was the response that you received from the administration? Did you have professors that were offering support, or maybe even saying, “I disagree but I still don’t want to see you treated like this”? What were those interactions like?

Chow: The student government at Berkeley interacts a lot with the chancellor and the administration at that level. They pretty much stayed silent on the whole issue, which was understandable because it’s just a conflict between representatives. They didn’t really want to take a side.

I did have a couple professors who reached out to me. One in particular, I was taking his class at the time, he’s definitely left-leaning, but he invited me to his office and said, “Hey, I hope you’re doing well. I read about you in the student newspaper, and I know that Berkeley can be a little bit weird sometimes, and I hope that you know I’m here to listen.” That just meant a lot to me because I know we’re at complete ideological odds, and yet to know that he had my back was really powerful.

Allen: That is really powerful. Wow. What advice would you give to other conservative or Christian college students who might find themselves in places where their opinions are controversial, and where they know they might face backlash for standing up for their beliefs?

Chow: I think too many times we simplify issues as black and white. That is what fuels the political wars of today. What I’ve learned throughout this entire past year is that behind every war of words are people.

Ultimately, at the end of the day, even what happened with me is not a transgender battle, is not an LGBTQ+ battle, it’s a people issue. It’s people failing to understand each other. Most importantly, people failing to understand that we love them, that God loves them, even if that’s not the way they expect it to be. Realize that people are people.

Allen: That’s so simple, but it’s so profound. Wow. What are your plans for the future?

Chow: I’m currently at the John Jay Institute, it’s a Christian academic public policy fellowship, one semester long. [I’m] really enjoying it. In 2020, I hope to be working in management consulting in San Francisco. We’ll see where that goes. I’m currently applying for jobs.

Allen: That’s wonderful. Well, it’s just so interesting to hear about what you’ve gone through, and really the wisdom that is obvious that you’ve gained through this experience. I really thank you for your time today, and for standing up for your beliefs and your convictions.