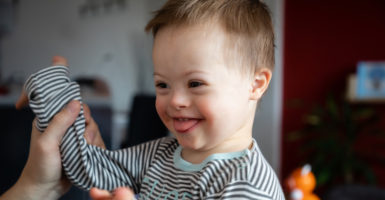 Parents in the U.K. sued a hospital for “wrongful birth” because their son (not pictured) was born with Down syndrome. (Photo: Getty Images)

This week on “Problematic Women,” we discuss parents in the U.K. who sued a hospital for “wrongful birth” because their son was born with Down syndrome. They claim, had they known, they would have had an abortion instead.

We discuss how prevalent aborting children diagnosed with Down syndrome is, both in Europe and the United States, and the importance of fighting for the dignity of all lives.

—Netflix released a miniseries titled “Unbelievable.” Based on real events, it tells the story of a woman who was raped, but those around her weren’t sure about her story. We discuss the lessons learned from the show and different ways to think about the #MeToo movement.

—Victoria’s Secret is featuring both a size 14 model and a transgender model in its recent “Love Yourself” campaign.

Listen in the podcast below.