4 Big Indicators of What’s Next in Impeachment Process 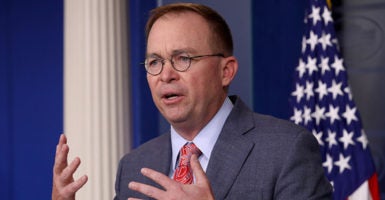 As House Democrats’ impeachment probe moved forward Thursday, a star witness told Congress that “no quid pro quo” existed in the president’s dealings with Ukraine and the president’s chief of staff told reporters that politics typically play a role in foreign policy.

Gordon Sondland, U.S. ambassador to the European Union and one of those named in a whistleblower complaint against President Donald Trump, testified in secret Thursday before a joint House committee pursuing impeachment.

Both men answered questions and raised others as the impeachment process advanced.

Here are four key indicators of what may be next.

Mulvaney provided what was widely perceived by Democrats as an admission of a quid pro quo in Trump’s July 25 phone call with Zelenskyy.

Trump and Zelenskyy talked broadly about corruption in Ukraine, he said, but allegations that a Democratic National Committee computer server is in Ukraine was part of that.

“Did he [Trump] also mention to me the corruption related to the DNC server? Absolutely,” Mulvaney said during the press briefing. “No question about it. But that’s it. That’s why we held up the money.”

The “money” the president’s chief of staff mentioned is $391 million in military aid to Ukraine approved by Congress but not yet delivered at the time of the phone call.

Mulvaney was clear that the administration didn’t withhold the funds because Trump wanted Ukraine to investigate the business dealings there of former Vice President Joe Biden’s son Hunter Biden, but, rather, potential Ukrainian corruption in the 2016 presidential election in the U.S.

Justice Department officials reportedly sought to distance themselves from the matter, saying they were unaware of any connection between cooperating with the probe and U.S. funding for Ukraine.

By law, the congressionally appropriated money for Ukraine had to go out by the end of the fiscal year, which was Sept. 30.

Asked if this were a quid pro quo, since the U.S. funding was conditioned on Ukraine’s investigating the Democrats’ computer server, Mulvaney responded: “We do that all the time with foreign policy.”

The president’s chief of staff appeared to be talking about how American presidential politics works, not just the Trump White House.

“We were holding up money at the same time for the Northern Triangle countries, so that they would change their policies on immigration,” he said, referring to the Central American nations of Guatemala, Honduras, and El Salvador.

“I have news for everybody: Get over it,” Mulvaney said. “There’s going to be political influence in foreign policy. … Elections have consequences.”

The White House chief of staff stressed that such is the case with every administration that has policy goals. Trump never has made a secret about disliking foreign aid, he said.

So, Mulvaney said, the president has no interest in spending American dollars on corrupt governments.

“The look back at what happened in 2016 certainly was one of the things he was worried about in terms of corruption with that nation,” Mulvaney said.

After 6 p.m. Thursday, Mulvaney issued a written statement clarifying his comments during the press briefing.

“Once again, the media has decided to misconstrue my comments to advance a biased and political witch hunt against President Trump,” Mulvaney said, adding:

Let me be clear, there was absolutely no quid pro quo between Ukrainian military aid and any investigation into the 2016 election.  The president never told me to withhold any money until the Ukrainians did anything related to the server. The only reasons we were holding the money was because of concern about lack of support from other nations and concerns over corruption.

Multiple times during the more-than 30-minute briefing where I took over 25 questions, I referred to President Trump’s interest in rooting out corruption in Ukraine, and ensuring taxpayer dollars are spent responsibly and appropriately.  There was never any connection between the funds and the Ukrainians doing anything with the server—this was made explicitly obvious by the fact that the aid money was delivered without any action on the part of the Ukrainians regarding the server.

There never was any condition on the flow of the aid related to the matter of the DNC server.

Pushing a foreign government for assistance in a political campaign and withholding funding is wrong, Sondland testified before House investigators.

However, the ambassador to the EU also stressed to lawmakers that there was no quid pro quo in Trump’s conversation with Zelenskyy.

William Taylor, acting U.S. ambassador to Ukraine, “raised concerns” Sept. 9 “about the possibility that Ukrainians could perceive a linkage between U.S. security assistance and the President’s 2020 reelection campaign,” Sondland said in his prepared statement, adding:

Taking the issue seriously, and given the many versions of speculation that had been circulating about the security aid, I called President Trump directly.

This was a very short call. And I recall the President was in a bad mood.

Sondland testified that his only agenda was the truth.

“I understand that some people may have their own specific agendas: Some may want me to say things to protect the President at all costs; some may want me to provide damning facts to support the other side,” Sondland said in his written opening statement. “But none of that matters to me. … Simply put, I am NOT here to push an agenda. I am here to tell the truth.”

He admitted some frustration about the president’s personal lawyer, former New York Mayor Rudy Giuliani, working on behalf of the State Department.

Giuliani has led an effort in Ukraine that is part of a larger probe of the origins of U.S. government investigations into Russian meddling in the 2016 election and possible involvement by the Trump campaign.

“Please know that I would not have recommended that Mr. Giuliani or any private citizen be involved in these foreign policy matters,” Sondland said. “However, given the President’s explicit direction, as well as the importance we attached to arranging a White House meeting between Presidents Trump and Zelenskyy, we agreed to do as President Trump directed.”

What Trump is being accused of would be wrong, he said.

“Let me state clearly: Inviting a foreign government to undertake investigations for the purpose of influencing an upcoming U.S. election would be wrong,” Sondland said. “Withholding foreign aid in order to pressure a foreign government to take such steps would be wrong. I did not and would not ever participate in such undertakings. In my opinion, security aid to Ukraine was in our vital national interest and should not have been delayed for any reason.”

Text messages that showed Sondland told an envoy to “stop texting” are not a sign of a cover-up, Sondland said.

“Any implication that I was trying to avoid making a record of our conversation is completely false. In my view, diplomacy is best handled through back-and-forth conversation. The complexity of international relations cannot be adequately expressed in cryptic text messages,” Sondland said in his opening statement. “I simply prefer to talk rather than to text. I do this all the time with family, friends, and former business associates.”

After a confrontation at the White House on Wednesday, House Speaker Nancy Pelosi said during a press conference Thursday that Democrats are moving forward with the impeachment process.

Pelosi, D-Calif., argued that this is not what Democrats wished to do upon being elected, and said they are proceeding “solemnly.”

“The times have found us,” Pelosi told reporters.

However, some House Democrats, such as Reps. Maxine Waters and Brad Sherman of California and Al Green of Texas, have called for impeaching Trump since 2017, his first year in office and well before the issue of the phone call with Ukraine’s Zelenskyy.

Several freshman House Democrats, such as Reps. Alexandria Ocasio-Cortez of New York and Rashida Tlaib of Michigan, were demanding Trump’s impeachment from the time they were elected.

House Intelligence Chairman Adam Schiff, D-Calif., who has taken the lead on the Ukraine investigation, has come under fire for not telling the truth about helping the whistleblower in the case and for publicly reciting a fictional summary of Trump’s conversation with the Ukrainian leader.

Nevertheless, Pelosi told reporters she is “very proud” of Schiff’s leadership during the impeachment probe.

With the House tied up in Democrats’ impeachment investigation and potentially voting out articles of impeachment to the Senate, much of the government could grind to a standstill.

Mulvaney said during his briefing that Democrats are accomplishing little with such a heavy focus on investigations of the administration.

“It’s quite true that President Trump and Speaker Pelosi have some significant political differences,” Kudlow said.

But, Kudlow said he didn’t believe the Democratic House would seek to deny Trump any legislative victory.

“Down through the many recent months, Speaker Pelosi has been cooperative and sensible and helpful in setting up meetings and discussions with our team,” Kudlow said.

The USMCA pact, if approved, would replace the North American Free Trade Agreement, or NAFTA, the 1993 trade deal that Trump scrapped in 2018.

“Even though I know we have big political differences in the fall, there is a sense among both parties that this is an historic treaty,” Kudlow said.

This article has been updated to include Mulvaney’s formal statement on what he told reporters earlier in the day.