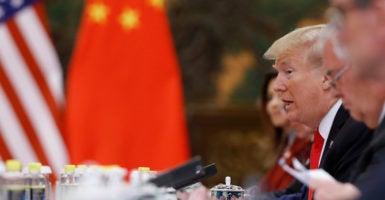 President Donald Trump holds a bilateral meeting with Chinese leaders at the Great Hall of the People on Nov. 9, 2017, in Beijing. (Photo: Thomas Peter-Pool/Getty Images)

President Donald Trump announced on Friday he has reached a tentative trade deal with Chinese negotiators.

This deal, labeled “phase one” of possibly two or three phases, is supposed to be finalized and signed next month when Trump and Chinese President Xi Jinping meet in Santiago, Chile.

As an immediate part of the deal, the White House is suspending an increase of tariffs on $250 billion worth of imports from China that would have gone into effect starting Oct. 15. The tariff rate on these products will remain at 25% for now.

The White House has decided it won’t make a decision whether to suspend additional tariffs scheduled for Dec. 15 just yet. And there has been no discussion about when negotiators plan to start lowering the tariffs already levied on almost $400 billion worth of goods Americans buy from China.

The removal of these tariffs should become a major part of negotiations as Americans continue to pay billions more each month.

Treasury Secretary Steven Mnuchin clarified that China will eventually buy between $40 to $50 billion worth of agricultural products a year.

While there is no text for phase one of a deal with China, in principle, other parts of the deal will include addressing issues like non-tariff barriers to U.S. agricultural exports to China, financial services and market accessibly, intellectual property protection, stopping the transfer of technology, and possibly an agreement on currency manipulation.

Some of these issues will be covered in other phases as well.

Ideally, Trump and Xi will sign phase one on the sidelines of the Asia-Pacific Economic Cooperation summit on Nov. 16-17 in Santiago, Chile.

Immediately afterward, negotiations for phase two will likely begin and potentially lead to a suspension of the Dec. 15 tariffs. The White House has plans to place a 15% tariff on roughly $160 billion worth of goods from China just before Christmas. These taxes would be on mostly consumer goods like toys and video games.

The administration is maintaining its tough negotiating style for now. If the last two years of trade talks has shown us anything, it’s the low level of trust between U.S. and Chinese negotiators.

Perhaps that’s the reason why negotiators decided on a phased approach. Negotiators may find it necessary to have incremental agreements of a China deal as they try to build confidence that the other side will commit to a deal.

But still, the announcement of a phased deal with China may come as a bit of surprise to some.

Since the beginning, Trump and his advisers have emphasized getting a large, comprehensive deal with China—one that’s not just about agricultural purchases but includes structural reforms as well.

At least for now, there will be no new tariffs this week, and markets have been cautiously optimistic since the announcement of phase one of the deal.