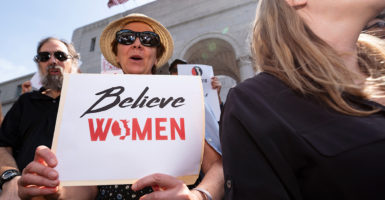 Ronan Farrow, the journalist at the New Yorker who first broke the story, published “Catch and Kill” this week, a book recounting these allegations and what became of the turmoil.

While the movement began as a necessity—as a way to expose abusive men in power, encourage women to speak out, and ultimately facilitate change in the workplace, especially Hollywood—that has all shifted in the course of two years.

The progressive left has since weaponized the movement for political purposes, causing it to veer off course and hurt men and women alike.

For the first several months of #MeToo, journalists like Farrow and actresses like Rose McGowan and Alyssa Milano forged a new path in exposing abusive, powerful men.

In October 2017, Weinstein was apprehended as heinous stories of assault trickled out one by one. Acclaimed actor Kevin Spacey wasn’t far behind him. By the end of the year, the scandal had moved from Hollywood to the news media as brave women stepped up to expose men like Matt Lauer of NBC News and Mark Halperin of MSNBC, both of whom lost their jobs immediately.

Hollywood was quick to jump on board with the #MeToo hashtag, notwithstanding the irony that it implicated top Hollywood names. At the 2018 Golden Globes, powerful women like Reese Witherspoon and Meryl Streep—and even a handful of men—wore black to communicate their solidarity with the movement.

By early 2018, a reckoning of sorts had taken place. Women felt empowered to come out of the shadows and tell the truth. A powerful signal had been sent: Powerful men would have to answer for sexual misdeeds.

But then, the momentum splintered. #MeToo veered off course, rather quickly and suddenly, and almost entirely at the behest of the progressive left.

The allegations got more vague, but the damage to reputations didn’t let up. In a now-infamous Babe.net piece, an anonymous woman dragged comedian Aziz Ansari for sexual misconduct. But upon a close read, it appears Ansari just lacked “game” and, at worst, had selfish expectations for their date. Hardly assault.

Throughout 2018, accounts like this began popping up more frequently, causing the standards of sexual assault to blur. It didn’t help that each incident was followed by swift media outrage and viral social media attention, now known as “cancel culture.”

Suddenly, it seemed any woman who accused any man of misconduct could ruin his reputation, regardless of the facts. All accused men would be treated as guilty until innocent in the court of public opinion, and any woman bringing an accusation would be recognized as a victim.

By July, The Atlantic reported that the movement’s founder, Tarana Burke, thought the movement had peaked and begun to backfire. “Part of the challenge that we have right now,” Burke said at the Aspen Ideas Festival, “is everybody trying to couch everything under #MeToo.”

She urged people to get back to focusing on the root of the problem, which was sexual violence.

Unfortunately, the movement she started had taken on a life of its own.

By September, Brett Kavanaugh, a nominee to the Supreme Court, would have his reputation tarnished and dragged through the mud in every conceivable way before a national audience—all without a shred of evidence to prove that he ever met the women who accused him of sexual assault in the early 1980s.

All the moral prestige of the #MeToo movement was suddenly being thrown against a political opponent.

In October, NPR reported that more than 40% of Americans surveyed thought the #MeToo movement had gone too far. The survey also found that Republicans and Democrats were divided over whether alleged victims should be given the benefit of the doubt, with 85% of Democrats saying they should and only 67% of Republicans agreeing.

But despite its political abuses and the blurring of lines as to what counts as “sexual assault,” #MeToo is not altogether lost.

Education Secretary Betsy DeVos has done her best to counter some of the abuses of #MeToo by enforcing new standards for the way Title IX protections are interpreted and enforced on college campuses.

Much like the #MeToo movement, former President Barack Obama’s previous policies fostered an atmosphere that stretched the definition of sexual misconduct on campus and gave credence to accusers, while the accused were often pronounced guilty until proven innocent.

DeVos’ new rules place boundaries on the definition of sexual misconduct, including where it occurred, how it was committed, and how it was reported. They also require a higher legal standard to assess the evidence of such alleged misconduct.

All of these measures protect both men and women, but particularly men, who were increasingly coming under false accusations or being accused of things committed long ago or off campus, with the lowest standard possible to convict: a “preponderance of the evidence.”

#MeToo is an important movement that began with a clear and morally upright purpose. It has no doubt changed society for the better in some ways—especially in Hollywood, by exposing abusers and empowering women.

But it went too far, and too fast, in vilifying men and heralding women, in muddying relationships and sexual encounters—treating all claims of “assault” as equally repugnant.

As #MeToo heads into year three, let’s encourage appropriate boundaries and standards of evidence, and strive to be a society that treats men as innocent until proven guilty while holding abusers accountable.