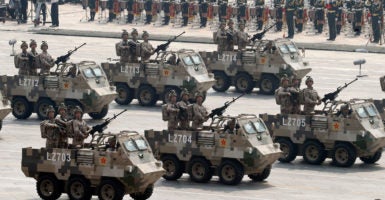 Military vehicles carry soldiers of the People's Liberation Army march during a parade to celebrate the 70th anniversary of the founding of the People's Republic of China at Tiananmen Square Oct. 1 in Beijing. (Photo: Sheng Jiapeng/China News Service/VCG/Getty Images)

China celebrated the 70th anniversary of the founding of the People’s Republic of China on Oct. 1 in typical fashion—with a military parade. Some of the new weapons on display that day provide cause for serious concern among U.S. policymakers.

The DF-41 ICBMs are capable of striking the United States while carrying multiple nuclear warheads. The U.S., meanwhile, depends on nuclear delivery platforms that are in some cases 30-40 years old. China is nearly done with an across-the-board modernization of all its platforms. The U.S. does not even have a mobile intercontinental ballistic missile.

But that’s not the worst of it.

The starkest example of China’s new capabilities was its unveiling of its DF-17 hypersonic glide vehicle. These vehicles are capable of traveling at least five times the speed of sound (greater than Mach 5). They use a standard ballistic missile booster at the outset but become a low-flying projectile for their second stage. They can be used to hit a target after the first stage’s ballistic reentry. Hypersonic glide vehicles are especially problematic because they are difficult to detect and defend against.

Despite aspirations, the United States has yet to successfully test a hypersonic glide vehicle. Much of this has to do with the fact that the U.S. industrial base is not yet ready to begin producing these weapons.

Conversely, the Chinese have thrown mass amounts of research and development money into hypersonics and prioritized their production. Experts have seen this showcase not only as a display of their rapidly growing military capabilities but also a sign of their intent to be a major military power.

This could all be chalked up to military gamesmanship, but it presents a vivid reminder to the U.S. military and policymakers that our military capabilities are currently outmatched in this area. Perhaps the most alarming aspect of all is that the United States has little to no hypersonic defensive systems.

Most of the Department of Defense’s funding for hypersonics is devoted to creating offensive weapons, not defending against them. Of the $2.6 billion devoted to the hypersonic program, only 6% is assigned for defensive systems. Perhaps it would be wise to devote more money to defensive systems, as both China and Russia are expected to be able to attach nuclear warheads to hypersonic glide vehicles as early as next year.

In addition to lacking the necessary industrial capabilities to even produce these weapons, the U.S. has no current plans to build these vehicles with a capacity to carry nuclear warheads. As a result, American hypersonic glide vehicles will need to be more precise in order to match our adversaries’ capabilities. This will make them more difficult to build as a whole than their Chinese (or even Russian) counterparts.

Regardless of whether the weapons displayed by the Chinese are fully operational, one thing is certain: The United States appears woefully unprepared to deal with this potential threat.