The New York Times Is Wrong. The Rich Pay More Taxes Than You Do. 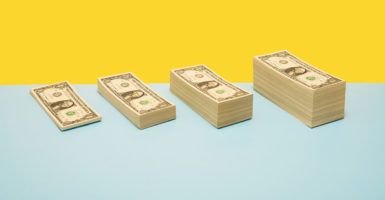 According to the best estimates, the highest-income Americans already send about half of their earnings to the government. (Photo: Getty Images)

By almost every measure, the U.S. has one of the most progressive systems of taxation in the world, in which high-income people pay the highest tax rates.

Everyone agrees on this basic fact, except The New York Times.

Using data from a new book by Berkeley economists Emmanuel Saez and Gabriel Zucman, the Times claims that the tax rate on the highest-income Americans was 23% in 2018, falling below the tax rates of all other income groups.

To get this result, they had to cook the books, systematically inflating the income of the richest Americans (without also increasing taxes) and leaving out important transfer programs for poor Americans, such as the earned income tax credit, which can more than offset the cost of the payroll tax for some with low incomes.

The tax code in America is exceedingly complex, and there is certainly no consensus on the one best way to measure progressivity or average tax rates. But when you look at all estimates—from the government, international organizations, left-leaning think tanks—you can only conclude that the rich do indeed pay more in taxes than lower-income Americans. In fact, they pay much more.

The most recent IRS data, from 2016, shows that the top 10% of income earners pay almost 70% of federal income taxes. However, after the estate tax, the federal income tax is the most progressive part of the U.S. tax code.

Looking at all federal taxes, the Congressional Budget Office shows that the top 1% pay an average federal tax rate of 33.3%. The data shows tax rates decline with income, and the poorest 20% of the population pays an average tax rate of just 1.7%.

Just looking at all federal taxes ignores the effect of state taxes, which tend to be less progressive, but make up a smaller share of total taxes paid.

The liberal Institute on Taxation and Economic Policy estimates that combined federal, state, and local taxes are still quite progressive. It finds the top 1% pay a 33.7% tax rate. The poorest 20% of Americans pay an average 20.2% cumulative tax rate.

While not available for as many income groups, data from the international Organization for Economic Cooperation and Development show a similarly progressive combined federal, state, and local tax code.

The novelty of the Saez-Zucman data is their focus on the households in the top 0.01% and the top 0.0003% (top 400 highest incomes). It is these households, they claim, that have seen the biggest tax cuts over the years.

The adjusted data show the top 0.01% will pay an average federal, state, and local tax rate of 50%, 20 points higher than the Saez-Zucman equivalent estimate. Splinter shows that the bottom income group’s true tax rate is closer to 13 percent, compared with Saez-Zucman’s 20%.

Two of the main assumptions that drive the Saez-Zucman results are a systematic overestimate of unreported (and thus untaxed) income for high-income households and their decision to leave out important subsidy programs that offset taxes paid by people with lower incomes.

Average tax rates are estimated by dividing taxes paid by income. Because not all income is reported to the IRS, official income measures have to be adjusted up, resulting in a lower effective tax rate.

Those who work in restaurants, for example, might not report all their tip income to the government, and landlords often don’t fully disclose their rents.

Saez and Zucman assume that households underreport income in proportion to their reported income. IRS audits of actual taxpayers show the opposite.

The ratio of underreported-to-reported income decreases for higher levels of income. The ratios also change over time. For example, around the time of the 1986 income tax cuts, reported income increased significantly because lower rates increase tax compliance.

For low-income taxpayers, Saez and Zucman leave out refundable tax credits and other means-tested benefit programs that help to offset the cost of payroll, sales, and excise taxes. Specifically, the “refundable” portion of the earned income tax credit and the child tax credit—which are outlays like other welfare spending—can offset almost all of the federal payroll tax for many of the lowest-income workers, especially those with children.

Since 1990, refundable federal tax credit rates have increased more than 400% for the lowest 20% of households, according to the Congressional Budget Office. Other means-tested transfer programs, such as Medicaid, have also increased substantially over time.

Researchers can reasonably debate which of these tax and non-tax programs to include when investigating the progressivity of the tax system, but simply including the programs explicitly administered through the tax code flips The New York Times’ narrative upside down.

There’s a broad consensus across the ideological spectrum that the U.S. has a highly progressive tax system.

Democrats can still argue for higher taxes on the wealthy, but we need to acknowledge that according to the best estimates, the highest-income Americans already send about half of their earnings to the government.